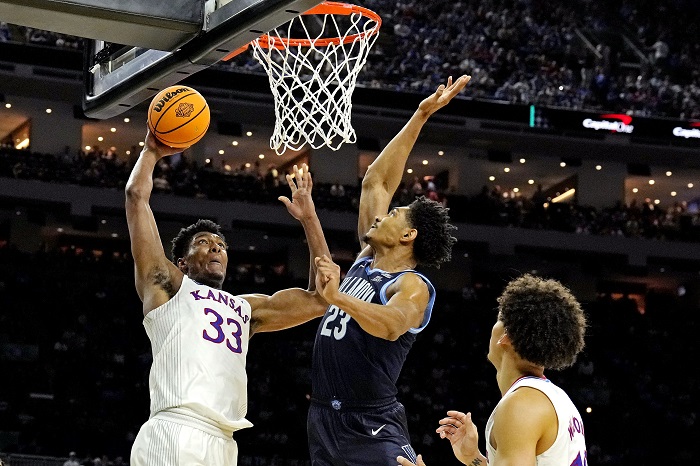 The Kansas Jayhawks leaned on two of its four-year vets to build a big lead and defeat the Villanova Wildcats, 81-65, in the first game of the Final Four on Saturday in New Orleans.

Two players that were part of the Jayhawks’ 2020 team — the one that saw its postseason canceled due to COVID-19 —led the way.

Guard Ochai Agbaji, who flirted with the NBA last offseason before returning for his senior year, had 21 points. He was deadly from outside, as he hit his first six field goals of the game — all of which were 3-pointers — before he started attacking the rim late in the game. He helped the Jayhawks finish with 13 3-pointers and a 52.4 percent clip from the arc.

Inside, it was forward David McCormack, who has had an up-and-down season due to injury and inconsistency. But on Saturday, he looked like the McCormack who was the Big 12’s Most Improved Player last season. He had a season-high 25 points and added nine rebounds. There were times that Villanova could not stop McCormack underneath. The senior moved the best he’s moved the entire tournament.

Kansas led by as many as 19 points in the first half, but Villanova (30-8) didn’t go away. On three occasions, the Wildcats cut the Kansas lead to single digits, in fact, the Wildcats had the lead down to six points with 6:10 remaining. A three-point play by Jermaine Samuels shaved the advantage to 64-58.

From there, Kansas pulled away. McCormack hit a put-back on the next possession. After forcing Villanova to a missed shot, Christian Braun’s pull-up jumper pushed the Kansas lead back to 10 points, 68-58, with 4:29.

Villanova answered with a free throw from Samuels with 4:29 left. But, on the next possession, Braun hit the shot that ended up being the dagger — a 3-pointer as the shot clock was set to expire with four minutes left. The basket put Kansas up 71-59 and the Wildcats never cut the lead back to single digits.

Braun scored all 10 of his points in the second half. Jalen Wilson added 11 points and a game-high 12 rebounds.

Collin Gillespie led Villanova with 17 points, while Brandon Slater had 16 points and Caleb Daniels had 13 points. The Wildcats were without Justin Moore, who blew out his Achilles in the Wildcats’ Elite Eight victory last week.

This was the fourth NCAA Tournament matchup between the Jayhawks and the Wildcats. Villanova previously beat Kansas in the 2018 Final Four, 95-79, and in the 2016 Elite Eight, 64-59. Kansas beat Villanova, 72-57, in the 2008 Sweet 16. All three times, the winner of the game ended up winning the national championship.

Kansas started the game as if it had been shot of a cannon and the Jayhawks leaned on two veterans — Agbaji and McCormack. Agbaji, who has had an up-and-down tournament, scored 12 points in the first half, all on 3-pointers. Meanwhile, McCormack scored 13 points in the first half, three points more than his season scoring average. At times, Villanova had no answer for the senior forward. He did sit for the final six minutes of the first half after getting his second foul.

Kansas was shooting 7-of-28 from the 3-point line in its last two NCAA Tournament games. The Jayhawks hit seven in the first half.

At one point, Kansas doubled Villanova in points, leading 38-16 as the Wildcats struggled to score and to keep the basketball. Villanova moved to a zone defense with six minutes left in the first half and it worked, but they only employed it coming out of a time out.

But, the Wildcats were able to unlock themselves in the final few minutes of the first half, as they ended on a 10-2 run, punctuated by a Gillespie 3-pointer off a second-effort under the glass. Gillespie finished the half with 11 points, including three 3-pointers, and Villanova was able to cut the lead down to 40-29.

Part of that was due to a downturn in Kansas offense, as the Jayhawks started the game 13-of-19 and the shot just 2-of-12 the rest of the first half.