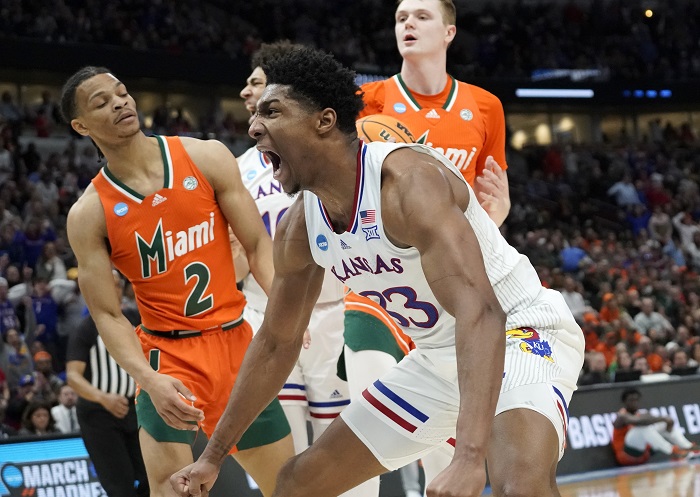 Kansas forward David McCormack has declared for the 2022 NBA Draft after a magical senior season that culminated in a national championship for the Jayhawks.

McCormack had an up-and-down year with a lingering foot injury, but he closed out the NCAA tournament by stringing together three of his best games of the season.

In the semifinal against Villanova, McCormack came one rebound short of a double-double but finished with a season-high 25 points.

Then, on Monday night, McCormack was a major part of the Jayhawks’ comeback victory over North Carolina. He totaled 15 points and 10 rebounds including two massive shots on back-to-back possessions late in the game to give KU the separation it needed to win.

McCormack’s announcement did not mention anything about returning to Lawrence, though he will have until June 1 to pull his name from the NBA draft pool. However, based on his post, that seems unlikely.

After the title game, Bill Self rewarded McCormack with the freshly cut net after his gutsy performance and season.

“All year in the most clutch times, times when the game is on the line, he put the ball in my hands,” McCormack said. “It shows that he loves me. He feels that I deserved that and that I worked hard to get in this position.”

McCormack currently projects as a second-round pick after his senior season with the Jayhawks which saw him average 10.6 points and 7.0 rebounds per game. He should be a solid big in the NBA and has a bright future if he can stay healthy.