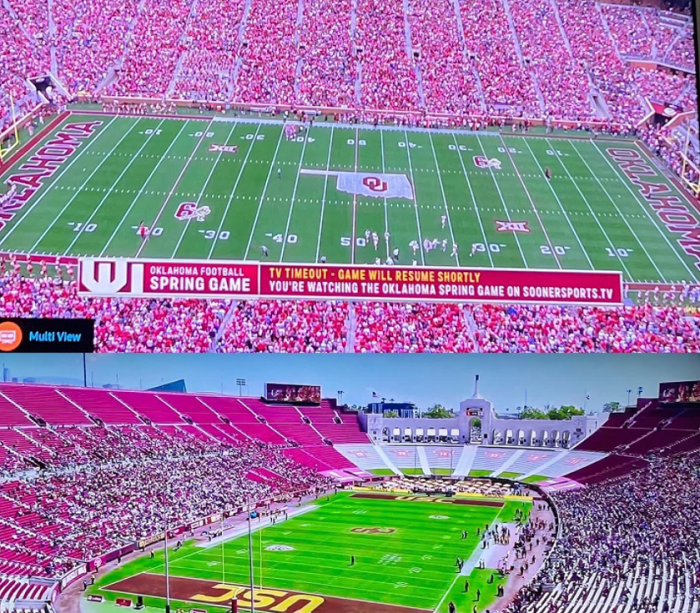 Lincoln Riley left Norman, Oklahoma for Southern California. And since then, many of the national media college football fan boys have crowed about how Riley knew that the upside at USC was ultimately higher than it was at OU, especially given the Sooners eventual move to the SEC.

However, one thing that is not debatable is the passion of the respective fan bases.

Saturday was spring game day across the country, including Oklahoma and USC, and needless to say many Oklahoma folks made a point to note the difference in attendance between the two fan bases.

Needless to say, this has to be very upsetting to Colin Cowherd, who has spent the offseason trolling Oklahoma fans over the Lincoln Riley move.

I’m just waiting for Stewart Mandel to chime in and remind us that USC is a half hour away from the beach.

The Sooners got more than 75,000 fans to show up to the spring game on Saturday, a record for the program. And new head coach Brent Venables was a big reason for that as he was challenging his fan base for weeks to show up in a big way, which they did.

Oh, by the way, USC set a spring game record too with 33,427 people attending. Yes, well less than half of what Oklahoma produced. But don’t worry, there is always an excuse, like this CBS Sports piece that says those fans, “braved the Los Angeles traffic.” Not all heroes wear capes.

Meantime, Lincoln Riley is just hoping to get a near-capacity stadium for the team’s opener against Rice in September, because, ya know, there’s a beach nearby, it’s hot, there’s traffic … and stuff. Pac-12 Football at it’s finest.