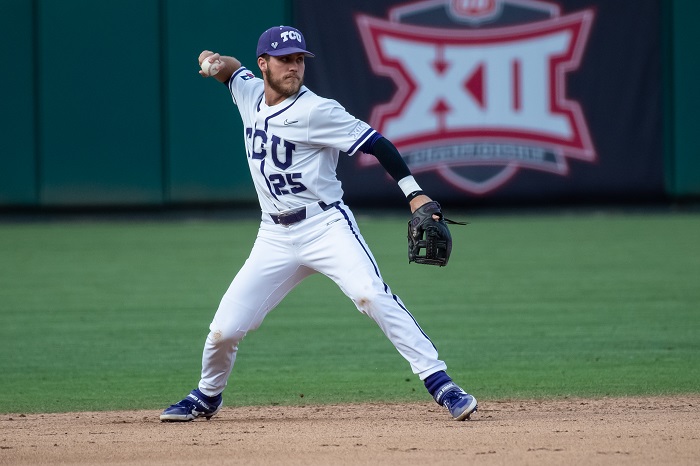 Baseball is in full swing as conference play has arrived. Each week I will release my Big 12 baseball power rankings and here are this week’s rankings.

Another week means another new number one on my baseball power rankings. TCU swept Texas Tech two weeks ago and just knocked off Oklahoma State in Stillwater this past weekend. Once they were sliding down this list and here they are sitting at the top of the Big 12 standings.

The Cowboys lost their first series in conference play and after also lost their number one ranking on this list. While it did hurt a little, the good news is that there is still plenty of baseball left and without a doubt, they are one of the top contenders for a Big 12 crown.

After getting swept against TCU, the Red Raiders needed to take care of business against West Virginia, and they did. While they should have completed a sweep, they did take two games of the series. Much like a few others on this list, this team is still very dangerous, and they will be a tough matchup for anyone in the conference.

Just like Texas Tech, the Texas Longhorns needed a bounce-back weekend. They weren’t playing well leading up to last weekend and they came out and absolutely crushed Baylor in all three games.

At one point, this team was as high as number two on the list and for the second week in a row, they have fallen down. They were nearly swept against Texas Tech, but they managed a late-game push on Sunday to avoid the sweep.

The Sooners have had some close games this year that they have fallen short in, but they had a great weekend in Lawrence as they dominated the Jayhawks outscoring them 46-12 in their three games.

Kansas State took a break from conference play as they faced UC Irvine at home. They were able to win game one on Friday before falling apart on Saturday. However, they did manage to wrap up their weekend with a series win on Sunday. Next up they will take on the Oklahoma Sooners.

Outside of Kansas, Baylor is the worst team in the Big 12. Early in the season, I thought this team had a chance to be competitive in the conference, and instead they have completely disappointed me in Big 12 play with a 4-11 record. It isn’t going to get much easier with Texas Tech and Oklahoma State still left on the schedule.

I don’t believe there is much to say here after getting embarrassed at home against Oklahoma. This team has a long way to go.