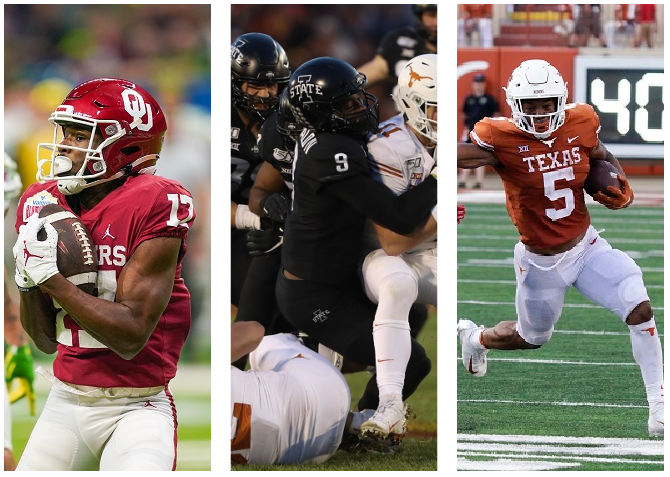 The 2022 NFL Draft has come and gone, and dozens of former Big 12 players were snagged in this year’s draft. Baylor wide receiver Tyquon Thornton was one of the bigger surprises of the draft when he was taken with the No. 50 selection, a pick the New England Patriots needed to trade up to get him from the Kansas City Chiefs.

Speaking of Kansas City, right in the heart of Big 12 country, the City of Fountains will be hosting the NFL Draft in 2023. It’s never too early to take a look at some Big 12 prospects who could be selected in next year’s draft.

Bijan Robinson could be another feather in the cap of the Texas Longhorns and their fantastic lineage of running backs to be selected in the NFL Draft. Robinson has NFL size, good vision, and excellent hands out of the backfield. He ran for 1,830 yards at 6.5 yards per carry while getting into the end zone 15 times on the ground during his first two seasons as a Longhorn. He will look to improve on those numbers in what will likely be his last season at Texas before he makes the jump to the NFL and is currently projected to be a Top 20 selection. A team like the Miami Dolphins, who are looking to use a three-headed running back rotation heading into the 2022 season, could be a good landing spot for Robinson to give them a featured option.

Tre’Vius Hodges-Tomlinson is the kind of player than any NFL team would be lucky to bring into their locker room. While he is a bit undersized, that didn’t affect his production or the fact that quarterbacks were scared to throw the ball his way more often than not. Hodges-Tomlinson has racked up numerous honors throughout his collegiate career thus far including First-Team All-Big 12 in 2020 and 2021. In 2020 he was a Second-Team All-American AP selection while earning First-Team All-American status by Pro Football Focus. The Senior will look to put together one more solid season before going pro and he could be drafted as high as the first round if he puts together another All-American effort in 2022. A team projected to draft near the end of the first round like the Lions (first round pick traded from Rams for quarterback Matthew Stafford) or the Tampa Bay Buccaneers could be a good fit.

The ascension of Will McDonald has been a fun one to see from afar. A kid who just wanted to play basketball and didn’t even step on a football field until his sophomore year of high school, he has become one of the greatest pass rushers in Iowa State football history. In 2020, he not only led the Big 12 but led the nation in sacks with 10.5 on the season. He followed up that incredible season with an even better one in 2021 when he finished the year with 11.5 sacks. He also added five forced fumbles which was third best in the nation. McDonald will look to improve on those impressive numbers even more for his Senior season and while he’s currently projected as a second round selection, he could very well work his way up into first round territory with the production he has the ability to put forth. A team like the Kansas City Chiefs who will be looking to add a pass rusher to their squad in the 2023 NFL Draft could be a good landing spot for McDonald.

Mims started out his career at Oklahoma with a bang, becoming the first Sooner wide receiver to ever land on the Football Writers Association Freshman All-American team. He caught 37 passes for 610 yards along with nine touchdowns, which tied for the most nationally. That was also a record for touchdown receptions by an Oklahoma freshman. He also showed his versatility as a return man on special teams. Marvin Mims’ success continued into his sophomore year as he led the nation in yards per reception at an eye-popping 22 yards per catch. He only had five touchdowns but will look to improve on that number during his junior season. His special teams abilities were on full display again and continually showed his versatility. Right now he is slated as a second round prospect but he could boost his stock and jump into first round consideration with a big junior campaign. Any NFL team looking for an explosive playmaker that has the ability to take it to the house whenever he touches the ball would be happy to have Mims on their team.

Johnston is a physical freak, as showcased in his 2021 highlight reel game against the Oklahoma Sooners when he grabbed seven catches for 185 yards and three touchdowns. He averaged. 19.2 yards per reception and led the Horned Frogs in receiving yards for the season which led to a First-Team All-Big 12 selection in 2021. His freshman year, he led the Big 12 with 22.1 yards per catch, which was a Big 12 true freshman record. Heading into his junior year, he will need to show more consistency week to week but he has what it takes to potentially launch himself into first round consideration of the NFL Draft in 2023. After the 2022 NFL Draft saw six wide receivers taken in the first round, it is prime time for guys like Johnston to showcase their stuff at the collegiate level before making the jump to the next level.  Like Mims, any team looking for a playmaker at the wide receiver position would love to have Johnston on their roster. He is a bigger and more physically imposing threat compared to Mims, which could bode well for Johnstons prospects as a pro.

The Big 12 has plenty of talent looking to ascend to the next level and the league could have several guys taken in the first couple of rounds in the 2023 NFL Draft.

Who is your favorite Big 12 prospect looking to make the jump to the NFL next season?