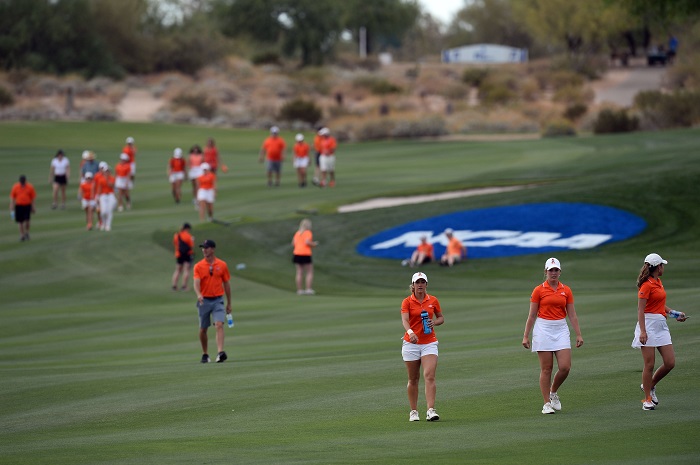 Oklahoma State is hosting its own regional and leads seven Big 12 teams into the NCAA Women’s golf regionals, which start Monday across the country.

The Cowgirls will be led by Lianna Bailey, who won the Big 12’s individual championship last month.

The Stillwater regional will be played at the Karsten Creek Golf Club. OSU is the No. 1 seed in the event, with Big 12 rival Baylor at No. 3.

The highest concentration of Big 12 teams will be at the Albuquerque Regional, to be played at the UNM Championship Course in Albuquerque, N.M. Oregon is the No. 1 seed. Texas is the No. 3 seed, while TCU is No. 6 and Oklahoma is No. 9.

Bailey finished 2-over for the Big 12 Tournament, while her teammate, Han-Hsuan Yu finished in a tie for third at 4-over.

The rest of the Oklahoma State team includes Rina Tatematsu, Maddison Hinson-Tolchard and Hailey Jones. All finished in the Top 36 of the Big 12 Tournament.

Baylor finished in a tie for second at the Big 12 Tournament’s team portion — along with Oklahoma State — and won in its last appearance as a team at OSU’s home course.

Texas won the Big 12 Tournament as a team, with Bohyun Park, Sara Kouskova and Bentley Cotton leading the way. Sophie Guo and Brigitte Thibault round out the five players headed for Albuquerque.

TCU is led by freshman Caitlyn Macnab, who finished in a tie for third at the Big 12 Tournament. Her teammates, Trinity King, Lois Lau, Valeria Pacheco and Sabrina Iqbal will also make the trip.

Oklahoma’s Hannah Screen was the Sooners’ top performer at the Big 12 Tournament, while the team finished sixth overall. Screen will be joined by Mikhaela Fortuna, Meagan Winans, Maria Fernanda Martinez and Libby Winans are also on the team.

At Stanford, Texas Tech will be led by Amy Taylor, who was Texas Tech’s highest finisher at the Big 12 Tournament. The other Lady Raiders making the trip are Chiara Horder, Gala Dumez, Anna Dong and Chelsea Romas.

Iowa State was fourth as a team at the Big 12 Tournament. The Cyclones include Taglao Jeeravivitaporn, Liyana Durisic, Warda Amira Rawof, Ruby Chou and Charley Jacobs.

Of the 396 players participating in the regionals, 132 will advance to the championship finals, with the top four teams and top two individuals (not on an advancing team) advancing from each regional.

The national championships will be May 20-25 at Grayhawk Golf Club in Scottsdale, Arizona.