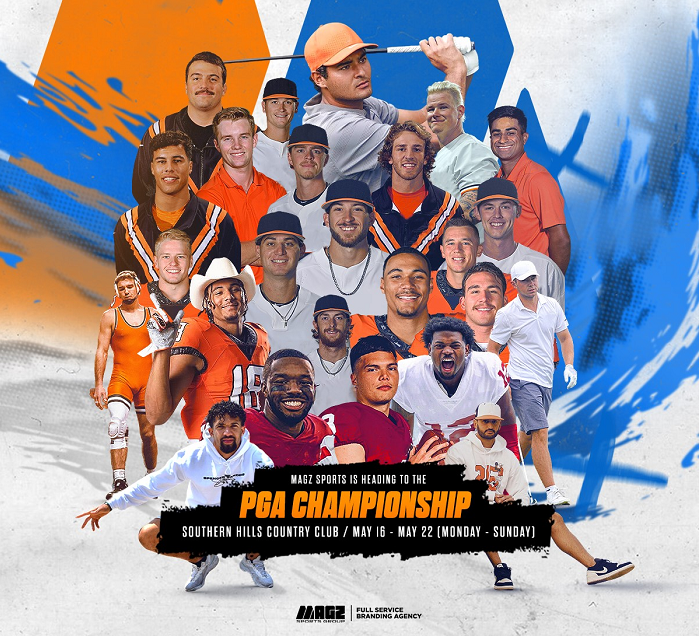 MAGZ Sports, a Name, Image, and Likeness (NIL) agency based in Dallas, Texas, has announced to a partnership with the PGA Championship that provides Oklahoma based MAGZ athletes the ability to attend the golf Major at Southern Hills in Tulsa, Oklahoma during the dates of May 19th-22nd.

MAGZ Sports, operating since August 1, 2021, is a full-branding agency specializing in branding identity, logos, and sponsorships for collegiate athletes. MAGZ represents several dozen student-athletes from all over the country that participate in varying sports. MAGZ has had the opportunity to work with some of the premier athletes the state of Oklahoma has offered in the past year such as Oklahoma State’s Spencer Sanders, Malcolm Rodriguez, and Collin Oliver, all three of which were All Big-12 selections along with Oliver being a freshman All-American.

Since the start of the NIL era in collegiate sports, the PGA has not participated in any form of NIL until now with MAGZ Sports solidifying this deal to be the first of its kind. Between May 19th-22nd, the PGA will host 25+ MAGZ athletes. The event will also bring forth the first time that Oklahoma State quarterback Spencer Sanders and Oklahoma quarterback Dillon Gabriel, will meet before their Bedlam matchup later this year on November 19th. MAGZ will also have some of OSU’s premier baseball players attending which will include projected MLB first round pick Justin Campbell and first year Cowboy sensation Griffin Doersching.

This partnership will allow MAGZ athletes to directly interact with fans during the tournament along with participating in special events such as photoshoots, autograph signings and much more! This deal opens the door for MAGZ athletes and the PGA to engage in marketing opportunities, business transactions and other content-based projects with the primary goal of helping grow each of their individual brands.

The PGA Championship, one of the four major golf championships, will hold their event at Southern Hills in Tulsa, Oklahoma, its fifth time at the location. The PGA is expecting some of golf’s biggest names to participate in the event with the biggest story line being the return of Tiger Woods, who will now participate in his second golf Major since his car accident in February of 2021. Woods will be joined by other golf superstars such as Rory Mcilroy, Scottie Scheffler, Victor Hovland, and many others of the world’s top golfers.