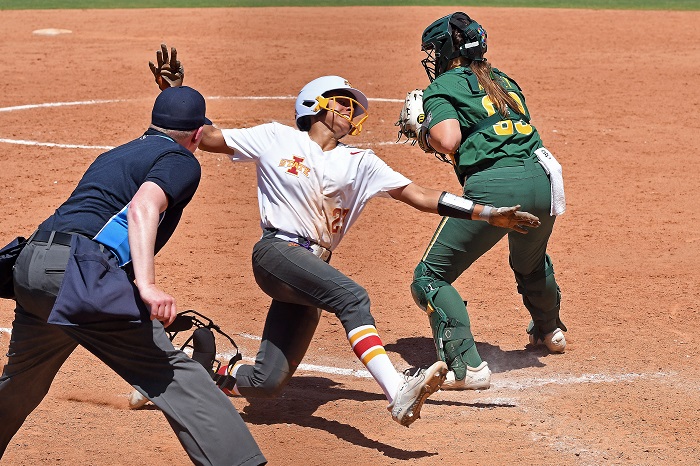 In the opening game of the 2022 Big 12 Softball Championship, the (4) Iowa State Cyclones defeated the (5) Baylor Bears in eight innings by a final score of 2-1.

Iowa State will now face (1) Oklahoma tomorrow at 1:00 P.M. in the Semifinals to decide who will take one of the spots in the Championship game on Saturday. Two more games remain today to decide the other semifinal matchup: (2) Oklahoma State vs. (7) Kansas at 3:00 P.M. and (3) Texas vs (6) Texas Tech at 6:00 P.M.

With that in mind, here are the three thing from the opening game of the tournament that stuck with me.

This game was an absolute defensive struggle, with no runs scored until the 6th inning on an errant throw by Iowa State catcher Natalie Wellet. Baylor pitcher Aliyah Binford (more on her later) was in the process of stealing third when the error occurred, allowing her to advance home for the first run of the game.

Then, interestingly enough, Iowa State’s run in the seventh was scored in similar fashion, as ISU’s Lea Nelson scored on a passed ball from third base. The winning run was scored in the bottom of the eighth inning when Kasey Simpson made contact this the bases loaded, bringing Angelina Allen for the final run of the 2-1 victory.

Together, the Bears and Cyclones combined for 16 strikeouts and went 1-15 with runners in scoring position. Over all Baylor was 7-29 at the plate, while Iowa State managed just 5-26 batting.

Even With the Loss, Aliyah Binford Was Terrific

Baylor nearly won this game because of the effort from sophomore pitcher Aliyah Binford. In the circle, Binford was great for the Bears, striking out eight batters and allowing just three hits on an afternoon in which she pitched 6.2 innings.

While she went 0-3 at the plate, she did reach base on a fielder’s choice in the sixth, which eventually led to her scoring the first run of the game.

Binford was pulled in the seventh after an apparent injury to her right hand, but her performance nearly single-handedly got the Bears to the semifinals, if not for a last minute comeback effort by the Cyclones.

Can the Cyclones Replicate Their Defensive Performance on Friday?

Holding Baylor to one run is one thing, but containing Oklahoma on Friday would be an entirely different story. Facing batters like Jocelyn Alo, Jayda Coleman, Grace Lyons, and Tiare Jennings will be a huge step up from what Iowa State saw on Thursday, and they know that all too well.

Just a few weeks ago, the Cyclones and Sooners met in Norman, with Oklahoma sweeping the series, outscoring ISU 24-6 over three games.

Take a few hours and celebrate Cyclones, tomorrow is going to be a whole new ball game.