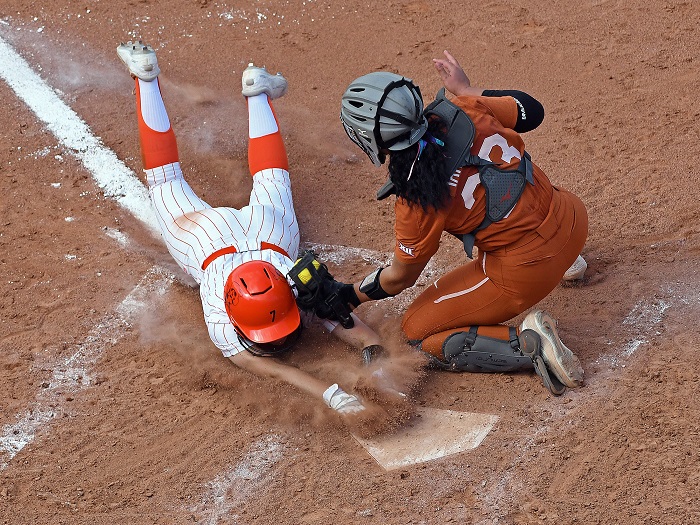 As it did three times in the regular season, Oklahoma State defeated Texas today by a score of 6-1, but this time it earned them a spot in the Big 12 Championship Finals.

Oklahoma State will now face their in-state rivals Oklahoma with the the tournament championship on the line this time around.

When they met last week, it was to decide the regular season champion, but the Sooners came out on top after a three-game sweep. This time around, OSU will be hoping for a different outcome.

Before we dive into that however, lets talk about what happened today in the matchup between the Cowgirls and the Longhorns.

Mike White Gets Tossed Ahead of the Second Inning

Oklahoma State scored two runs in the first inning, following two controversial plays. The first play, an obstruction call that wasn’t called until after a review, gave Chelsea Alexander the first run of the game and the Cowgirls a 1-0 lead.

Then, to end the second inning, the Cowgirls were awarded a second run after review when Chyenne Factor was found to have scored before Texas recorded a double-play at second base. This call sent Texas head coach Mike White over the edge, and into a frenzy that ended in the Longhorns coach flipping the blues the bird and exiting into the dugout.

As a head coach, you’ve got to have better situational awareness, and this isn’t a good look as he acknowledged in a statement after the incident.

“Today, I was ejected from the Big 12 Championship semifinal game versus Oklahoma State. I would like to apologize to everyone involved including the Big 12 Conference, Oklahoma State, my softball team and all texas fans for my actions after being ejected.

“I am an intense competitor by nature, and in the heat of the moment I made a rash decision which I truly regret.”

Opportunistic Offense and Stifling Defense A Dangerous Combo For OSU

Oklahoma State won today because they played smart softball, and there’s not much more to it than that. The second run of the day only happened because of smart base running. Then, in the fourth inning, the Pokes got two more on the board. Taylor Tuck hit a sac fly to right center field, bringing Jules Callaham around to make it 3-1 Cowgirls.

Then, Oklahoma State struck again with an excellent bunt and run from Brianna Evans that allowed her to advance to second after the first baseman lost her train of thought and also allowed Sydney Pennington to score, making it 4-1.

The Cowgirls added two more in the sixth, making it 6-1 and that proved to be the final tally. Outside of a solo home run in the fourth from All-Big 12 Freshman Mia Scott, the Longhorns weren’t able to strike back, as the Cowboys defense stood tall.

Chalk Bracket Leads to Bedlam in the Finals

All five games, including this one, saw the higher seeded team come out on top. It’s not a surprising outcome, considering the way that Big 12 play went this year, but to see chalk all the way through is rare.

Hell, we just saw Alabama fall to Missouri in the SEC tournament yesterday, and Clemson topple Virginia Tech in the ACC tournament today.

However, you’re not going to hear me complain about getting a fourth iteration of Bedlam this season, and this time around could be a little different, considering Jordy Bahl likely won’t be in the circle.

The Sooners are dangerour nonetheless, and will be a tough out for the Pokes, but Kenny Gajewski and company have to like their chances after the Cowgirls performance today.