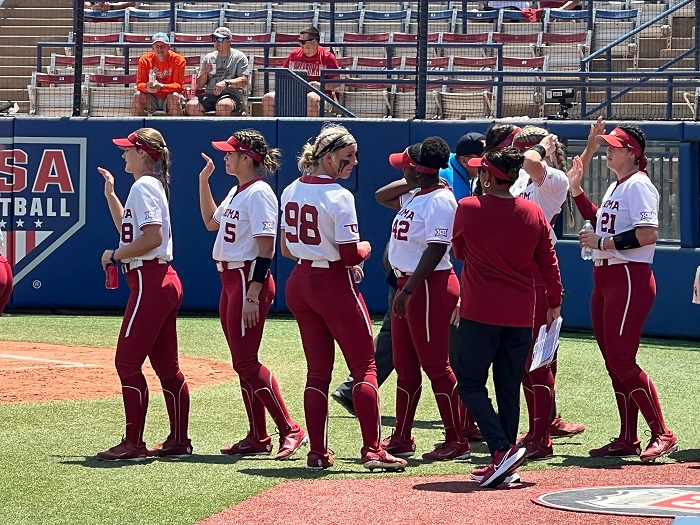 On Saturday afternoon the Oklahoma Sooners suffered their second loss of the season, this time to the Oklahoma State Cowgirls in the Big 12 Championship Finals.

The Sooners lacked an edge that they have played with all season this weekend, as something just didn’t seem right in either of their games. Well, the most likely culprit of that lack of intensity comes from the fact that freshman ace Jordy Bahl didn’t appear in the circle this weekend.

After yesterday’s win over Iowa State, Oklahoma head coach Patty Gasso was asked about the status of the Big 12 Freshman of the Year.

“There’s a little bit of soreness and we don’t want to mess with that,” Gasso said of Jordy’s status. “We should be able to do this just with our other pitchers, and they need to feel that… We’re just being really, really slow with [it.] If we don’t need to use Jordy, we’re not going to use Jordy because more than anything, these other need this. They need this tournament. So why would I put Jordy, who’s had more innings than anyone else, in if she’s feeling a little bit of tightness?”

Today, after their loss to Oklahoma State, Bahl was again a topic of conversation at Oklahoma’s postgame press conference.

“She’s got enough soreness that we don’t want to mess with that,” Gasso said, keeping the status quo from yesterday. “We’re just leaving it alone and just taking it day-by-day. We will know by next week where she’s at, but were really not even picking up a ball or circling anything right now. We’re just going to wait and see from doctors when it’s time to check and see where we’re at.”

It doesn’t sound too promising for the Sooners, but it could be worse. Gasso typically isn’t one to mince words, so the possibility of Bahl returning soon for Oklahoma isn’t out of the question. This will certainly be something to watch as the week progresses.