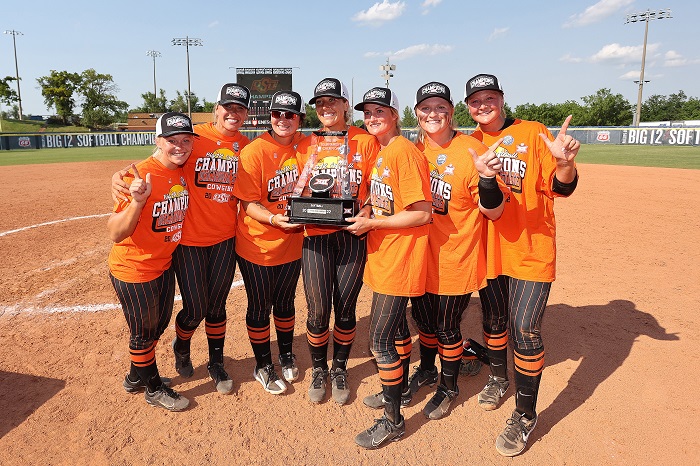 On a scorching hot Saturday in Oklahoma City, the Oklahoma State Cowgirls defeated the Oklahoma Sooners 4-3 in eight innings to capture the 2022 Big 12 Championship, their first in school history.

In a game where the heat, and the sun, played a factor, it was the Cowgirls who came out on top after an emotional up-and-down game on both sides.

Here are three thoughts I was left with after the Pokes secured their first Big 12 Championship.

What a Game it Was

This game was a back-and-forth affair, with the Sooners taking a 2-0 lead in the third inning, just before the Cowgirls tied it up in the top of the fourth, and took the lead in the fifth as a Chyenne Factor bunt allowed Chelsea Alexander to score, making it 3-2 Cowgirls. Then, Jocelyn Alo stepped into the batter’s box in the boom of the same inning and belted one over the left field wall to tie things up again.

We stayed deadlocked at 3-3 all the way until Hope Trautwein gave up a leadoff single and walked two in the top of the eighth. Nicole May reentered the circle, after being pulled in the fourth inning. She walked one, and allowed the winning run, although the help of her defense game the Sooners fighting chance. Unfortunately for the Sooners, the bottom of the eighth was all about the Cowgirls defense.

Morgan Day shut the door on the Sooners chances by getting three outs in four batters that frame, and secured a massive win for her team.

Nicole May, and Hope Trautwein in relief, were serviceable for the Sooners and did what they needed to to keep Oklahoma in the game, but it was clear that this team lacked the same edge that we saw last weekend when these two teams met up in Norman.

Combined, May and Trautwein had just two strikeout, three walks, but did hold Oklahoma State to 7-26 (.269) and 2-8 (.250) with runners on base. Trautwein was brought in to relieve May after she walked back-to-back batters and allowed two runs in the fourth. If you remember, Trautwein had a 7.0 inning game yesterday where she struck out 14, but she looked exhausted.

Nonetheless she fought through it and kept the Sooners in a position to win, but eventually ran out of gas in the eighth inning. Where did the Sooners turn? Back to Nicole May. In a tough position, May got the Sooners out of a bind, but game up the winning run in the process. Having a dominant arm in the rotation like Bahl is what made the Sooners staff so dangerous and they certainly missed her today.

What a ride it has been for this Oklahoma State team. Last week, they were on the tail end of a five-game losing streak and now, they are Big 12 Tournament Champions.

This win all but guarantees that the Big 12 will have two schools selected as top eight seeds on Selection Sunday, as Oklahoma State did what it needed to do to host through Super Regionals.

this turnaround really started yesterday with OSU’s victory over Texas. At one point in that game, you could feel that the Pokes had their mojo back, and that the streak they ended their regular season with was far behind them. The Cowgirls had an edge to them that Oklahoma just plain didn’t.

Kenny Gajewski and the Oklahoma State Cowgirls can celebrate their massive win over Oklahoma, and sleep well tonight knowing that this win earned them home field advantage all the way through the month of May.