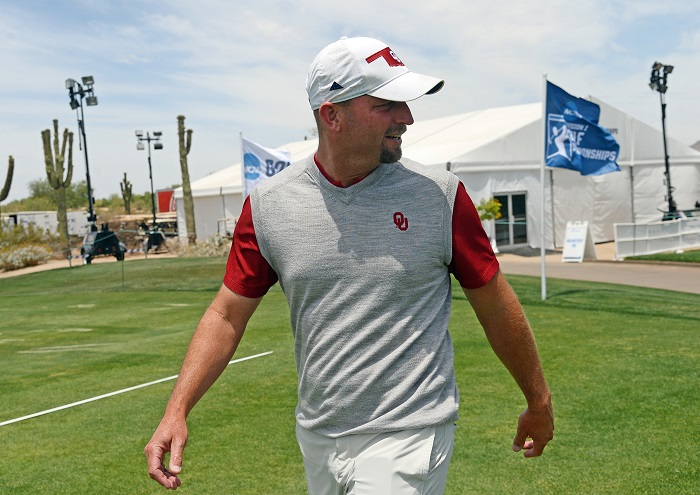 Oklahoma men’s golf coach Ryan Hybl told The Oklahoman earlier this month about his experience of gathering with the university’s legendary coaches—Bob Stoops, Patty Gasso, Sherri Coale, Mark Williams, and John Roddick. It was 2009, Hybl’s first year as the golf coach. Then, 27-years-old, Hybl said he wasn’t intimidated but inspired.

“Look at the great coaches I’m getting ready to coach alongside at OU,” Hybl said. “Hopefully, I’ll jump right in line and create something special like they all have.”

After all, Hybl belonged to a legendary group of golfers—Tiger Woods, Phil Mickelson, David Duval, Jordan Spieth, and Scottie Scheffler—to name a few. Each had earned the honor of Player of the Year by the American Junior Golf Association before hitting the big time. Hybl was named a three-time AJGA All-American and the association’s top player in 1998 when he was at Colbert High School in Georgia. He nearly signed with the Sooners in 1999 when his older brother, Nate, was a redshirt quarterback on the football team.

Ryan opted to stay close to home and played for the University of Georgia from 2001-04 and earned first-team All-American and All-SEC honors his sophomore year. He then served as an assistant for the Bulldogs for four years before coming to Norman. He helped guide the Bulldogs to two SEC Championships in 2006 and 2009, the latter before Ryan got the OU gig. UGA also won the 2005 national championship.

Oklahoma State coach Mike Holder had pursued Hybl to join his staff as an assistant. Oklahoma athletic director Joe Castiglione was searching for a head golf coach at the same time and after an impressive interview, Ryan got the job.

Hybl explained that his priority as head golf coach was to change the perception of his team.

This year’s Sooner squad won the Big 12 Championship last month. Oklahoma is ranked No. 1 and hosting one of the NCAA Regionals beginning Monday at Jimmy Austin OU Golf Club in Norman. Thirteen teams will compete for five slots to the national tournament held May27-June 1 in Scottsdale, Ariz. Texas and Kansas State are two Big 12 Conference schools competing in the field.

With 11 national titles, Oklahoma State is the only other Big 12 team to win national championships—three since joining the league in 1996. The Cowboys, the measuring stick of college golf greatness, hold 55 conference titles—11 since joining the Big 12.

Hybl Closing in on Greatness

If Oklahoma wins a third championship, Ryan Hybl, who now ranks among legendary coaches at OU, could become one of the elite coaches in NCAA Men’s Golf.

“Just because of that rivalry (with OSU) and their history, it’s a tough task to go into Norman as a golf coach and put yourself in the same sentence as the guys from Stillwater,” said Logan McAllister, a senior on this year’s Sooner squad. “He’s helped us use that motivation as a driver of success.

“He does a good job of lighting that fire and keeping us hungry. Some good teams don’t have that. I still feel like OU golf doesn’t necessarily get put in the same sentence with some other teams.”