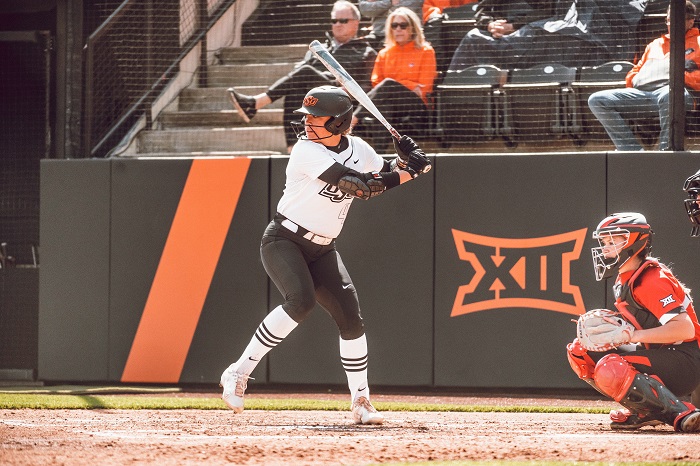 Oklahoma State took care of business against the Big Ten Champs on Saturday, defeating Nebraska 7-4 in the second round of the Stillwater Regional.

The victory means that the Cowgirls now await the winner of Game 5, which is set to be played tonight at 6:00 p.m. CT. Nebraska will face the winner of Fordham and North Texas in that one, with the loser going home and the winner needing to beat Oklahoma State twice on Sunday to advance to the Super Regionals.

With that in mind, here are three thoughts from the Cowgirls victory over the Nebraska Cornhuskers.

Going into the fourth frame, Oklahoma State held a 1-0 lead over the red-hot Nebraska team that just ran through the Big Ten Tournament. Then, a two RBI single from Nebraska designated player Courtney Wallace gave the Huskers a 2-1 edge going into the bottom of the inning. The Cowgirls responded emphatically, putting up four runs in the bottom of the fourth, the first coming on an error by Nebraska that allowed Hayley Busby to round third and go home. That play seeming opened up the flood gates for OSU, who went on to score five more runs over the next two innings.

The Pokes’ bats were cold during their five-game skid to end the regular season, but since that point they have been on fire. As a team, OSU was 11-30 (.367) at the plate, drawing three walks along the way and tallying up seven runs. They put up those points without a single homerun, pointing to their excellent base running and their playmakers attention to detail when on-base. The play by Hayley Busby mentioned above should’ve been an easy out at third, but the error, and Busby’s experience, turn it into a run.

Oklahoma State’s pitching staff will be the reason that this team makes it to the Women’s College World Series in a couple of weeks, and Morgan Day is a major part of that equation. Her performance today was enough to give the Cowgirls the win, and it was a major challenge against a team that was on fire coming into the game. In a full 7.0 IP performance, Day allowed five hits on 25 batters faced (.200), four earned runs, three walks, and two strikeouts. No, it wasn’t her best performance of the season, but it gave the Cowgirls enough separation from a dangerous Nebraska team to keep Kelly Maxwell fresh for Sunday.