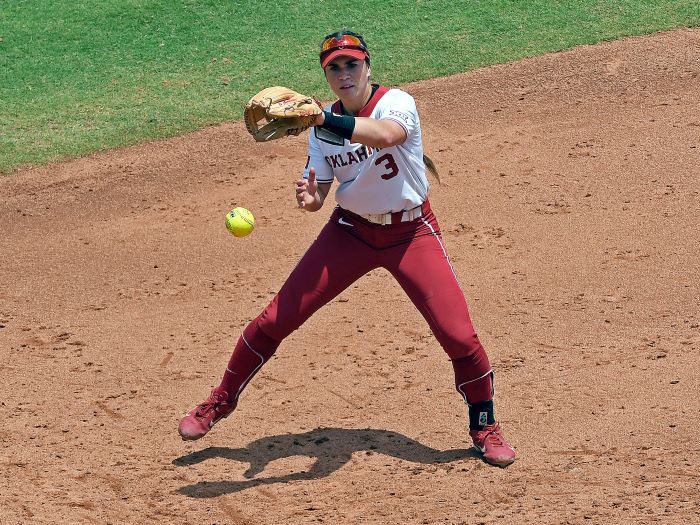 In the second round of the Norman Regional, Oklahoma avoided a major upset as they got by Texas A&M by a score of 3-2 to advance one game closer to Super Regionals.

The Sooners will now await the winner of Game 5 of the Norman Regional, which will be played tonight at 6:00 p.m. CT. Texas A&M will face the winner of Minnesota and Prairie View A&M in that one, with the loser going home and the winner needing two wins over Oklahoma on Sunday to advance to Super Regionals.

With that in mind, here are three thoughts I was left with after the Sooners narrow victory over the Aggies of Texas A&M.

Hope Trautwein was good enough to win today, allowing just three hits in 23 batters faced over 7.0 IP, but the real MVP of this game was the Oklahoma defense. 19 of the 21 outs that the Sooners needed to win this one were secured by the defense, as Trautwein was only able to wave two at the plate all day. Now, she did only have to throw 77 pitches in this game, with 54 of them being strikes, so it’s not as if she struggled today, but the defense behind her was flawless today, committing zero errors and making things look routine in the field. It was their combined effort that led Oklahoma to victory.

In the sixth inning, a single from A&M outfielder Cayden Baker was followed by a Haley Lee home run on the next at-bat, giving the Aggies all the momentum and cutting the Oklahoma lead to just one run. It was just Trautwein’s second home run allowed all season and her first since February, and it almost seemed to sun the Sooners. However, instead of letting the wave of momentum carry Texas A&M to a massive regional upset, Hope and the Sooners put away every remaining A&M batter and the upset attempt fizzled out.

Recently, it has become a trend for Oklahoma’s bats to go cold every other game or so, and today was one of those games. In the first inning, Jayda Coleman got the offense off to a rolling start with a leadoff homer, and Grace Lyons doubled to center field bringing in Jocelyn Alo. Then, A&M switched pitchers, as opponents have been doing early and often against OU, and it worked. Just one more run came across home plate for the Sooners in the game, when Rylie Boone was brought in by a Jayda Coleman double in the fourth. Oklahoma went 7-23 at the plate, hardly the type of performance we have been used to seeing from Patty Gasso’s squad.