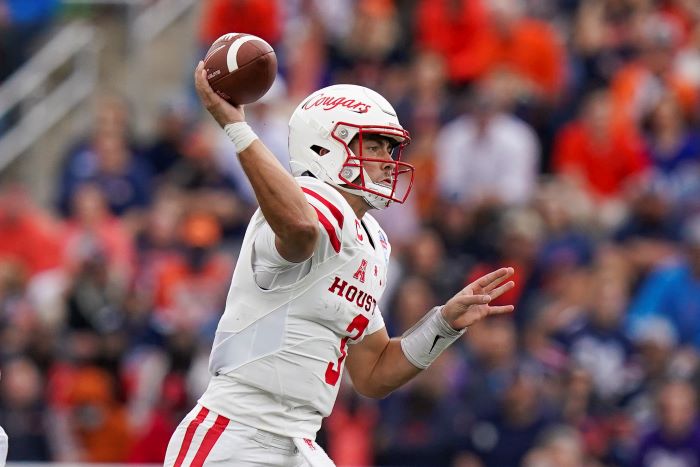 Houston quarterback Clayton Tune will be on the cover of the 2022 College Football America Yearbook, out later this summer.

Houston is preparing to move to the Big 12 Conference, a move that could take place as early as July 1, 2023, if the Cougars and their fellow American Athletic Conference programs can work out a deal with the league. Cincinnati and UCF are also making the move with the Cougars. BYU, currently an independent in football, will join the Big 12 on July 1, 2023, as a full member.

As of early May, the three schools were reportedly working to settle an exit fee with the AAC that would allow them to move to the Big 12 next football season.

Tune is entering his fifth year of college football and is coming off his best season. In 2021, Tune threw for 3,546 yards, 30 touchdowns and 10 interceptions. His passing yards and touchdown passes were 14th in FBS.

Houston is coming off a 12-2 season in which its own losses were to Texas Tech and to Cincinnati, the latter of which came in the American Athletic Conference championship game. The Cougars ended the season with a Birmingham Bowl win over Auburn, 17-13. The Cougars are definitely a favorite to win the AAC in 2022.

Last year the Yearbook put Iowa State quarterback Brock Purdy on the cover. Purdy was coming off leading the Cyclones to the Big 12 Championship Game in 2020. Purdy was ‘Mr. Irrelevant’ in the 2022 NFL Draft, taken with the final selection by the San Francisco 49ers.