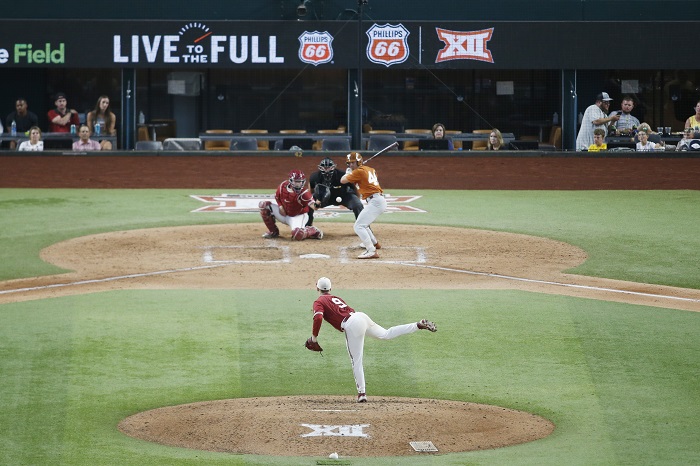 ARLINGTON, Texas — A week ago Cade Horton was out of control. On Sunday, he was the epitome of it.

The Oklahoma pitcher knew he had to recalibrate himself after his last start at Texas Tech. He gave up eight hits and eight runs in 3 1/3rd innings. It was the second straight appearance he gave up eight hits. The Sooners put him back in the starting rotation in April. He was a year out from missing the season due to an injury.

In a sense, he was still finding himself.

In a tournament like the Philips 66 Big 12 Baseball Tournament, every pitcher is available … to a point. For instance, Texas basically threw two bullpen games on Saturday in an attempt to get to the championship game against OU on Sunday, which the Sooners won, 8-1.

Horton knew his number would be called at some point. That point came on Sunday. The first step forward was to get back to basics.

“I told myself, You know, this week I’m just gonna be myself,” Horton said. “I’m gonna keep my emotions under control and just treat it like it’s a bullpen and just hit targets and whatever happens, happens.”

The next step? Since Horton had some time on his hands between facing Texas Tech on May 21 and this start, he and Sooners coach Skip Johnson worked on a new pitch, a cutter, which Horton implemented on Sunday.

The line says that Horton threw 5 1/3rd innings, giving up two hits, one run and two walks while striking out nine. But he threw 94 pitches. It wasn’t always the epitome of efficiency.

He gave up an historic home run to Texas slugger Ivan Melendez in the first inning. The home run made him the all-time leader in home runs at Texas and gave him the third-most in Big 12 history. Horton bounced back by striking out Murphy Stehly.

The only other hit was a hit by Trey Faltine in the third inning. Horton worked around it. He worked around a couple of walks in the fourth, and a wild pitch that put a runner on third base. By then the Sooners had an 8-1 lead and Horton had breathing room.

But Johnson didn’t want his starter to let up. He also didn’t want him to get too hot about the mistakes. He emphasized that on his mound visit during the game.

“Don’t worry about the outcome, just throw the ball to the target,” Johnson said. “The sun’s gonna come up tomorrow. That’s all I said.”

Horton struck out the two hitters after giving up those back-to-back walks in the fourth. The fifth was perfect. Johnson pulled Horton after he hit Melendez with a pitch in the sixth. It was time. The Sooners let the bullpen do the rest.

Horton needed time to clear his head. Johnson needed a pitcher with a clear mind.

Both got what they needed on Sunday. What’s that saying in baseball?

“If you try to do something in this game, you fail,” Johnson said.

Horton put together a great start. And it didn’t look like he was trying, if you get the point.