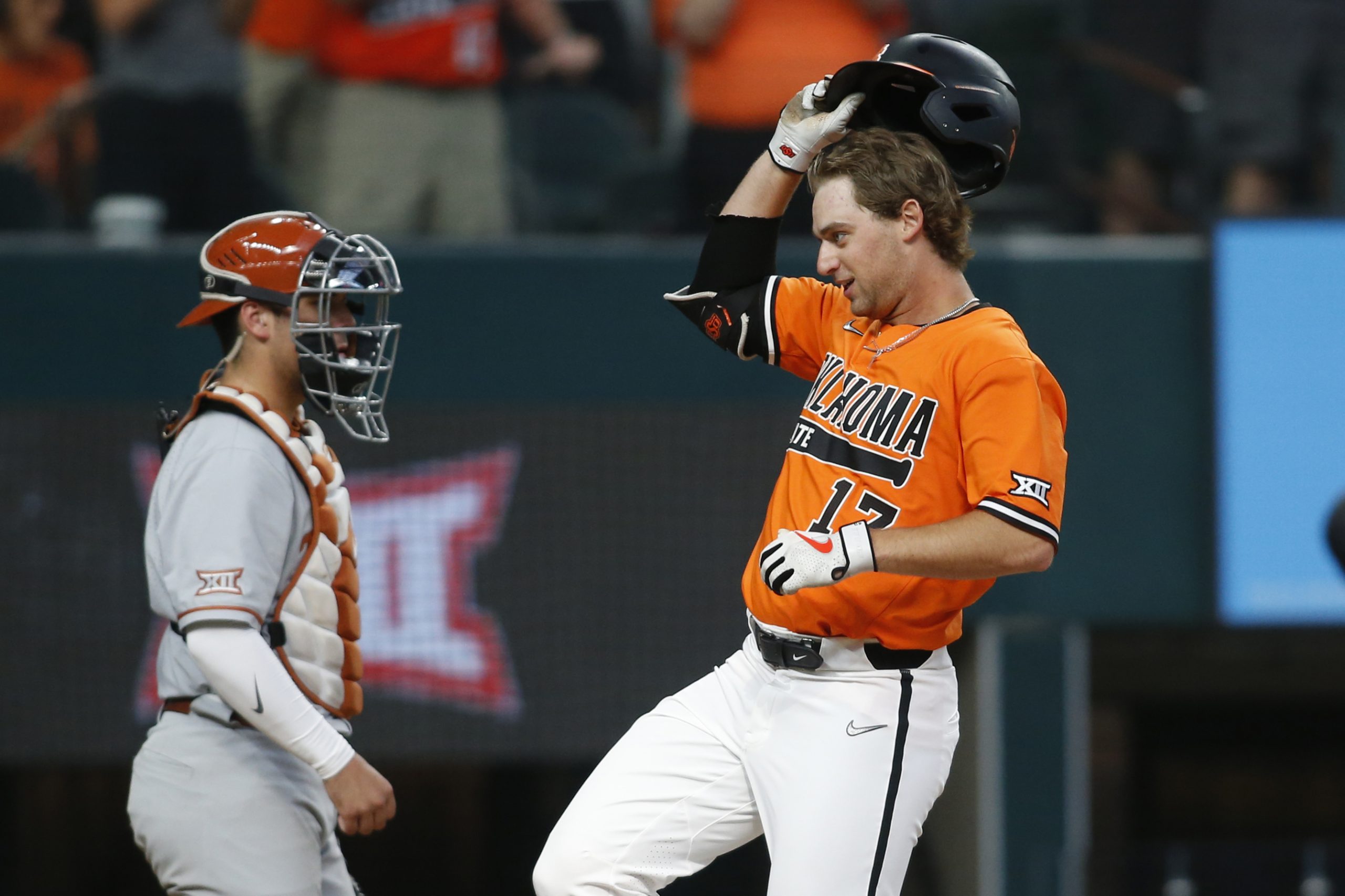 Conference tournaments are over and the Field of 64 has been announced for college baseball. We have a total of five Big 12 teams in the postseason and two of them will be hosting a regional this upcoming weekend. Some schools have easier draws than others and some got downright hosed. Here are my six thoughts on the Big 12 postseason schedule.

1. I Was Surprised to See Oklahoma State Get a National Seed

I knew the Cowboys were going to be a regional host and that was confirmed on Sunday night. However, I didn’t think I would see them in the top eight. Oklahoma State is the number seven seed overall and if they are able to get past their own regional, they will be hosting a Super Regional as well. That’s huge for them and I cant think of a better place to host a regional than beautiful O’Brate Stadium. They have some interesting teams in their regional with Grand Canyon and Arkansas, but I believe they can manage to get through it.

2. Texas Has a Familiar Foe in Game One

Say what you want about midweek games in college baseball, but they are big for those non-power five schools to boost their resumes. Air Force went to Austin for a two-game set back in April and won the first game 14-2 and put up ten runs in a loss in game two. I know the Longhorns didn’t start anyone in their weekend rotation, but I thought it was interesting to see them get Air Force in game one.

3. Texas Tech Has a Long Road to Omaha

The Red Raiders will be heading to Statesboro, Georgia to play Notre Dame in their first postseason game. Many thought Notre Dame could have been a host but instead they are paired of up with Texas Tech. That is a tough game one and how great is college baseball where a school like Georgia Southern can be a host? If Texas Tech manages to escape their regional, they will have an even tougher task ahead because Tennessee will likely be waiting for them in the Supers.

4. The Storylines Could Write Themselves in College Station

TCU may have won the Big 12 regular season title, but I am here to tell you that they have the toughest draw out of any Big 12 team. They are traveling to College Station where Texas A&M is the host, and they will be taking on a good Louisiana team in game one. Even the Aggies opponent Oral Roberts is pretty good and that is one stacked regional. Also, let’s get to the real story here. Jim Schlossnagle was coaching TCU last season and now he is at Texas A&M. That itself is one juicy storyline to keep an eye on and don’t forget that TCU head coach Kirk Saarloos was ejected in TCU’s final Big 12 tournament game which means he will not be able to coach in game one of the regional.

5. Oklahoma Should Be Hosting a Regional

If there was any team in the Big 12 that got snubbed from a host big it was the Oklahoma Sooners. They won five straight series coming into the Big 12 tournament and then won it going a perfect 4-0 this past week. I don’t care what the RPI says or who is ahead of them because they should be hosting a regional. In fact, I would have had them host over Texas or Oklahoma State. The Sooners finished just a win shy of clinching a share of a Big 12 regular season title and are by far the hottest team in the Big 12 right now. And to be honest, they may be one of the best teams in the entire country at this very moment.

6. I have Some Issues with the Selection Committee

When I look at the tournament overall, one thing that really stood out to me was the randomness of the regional selections. They have teams flying all over and typically they try and get teams to play somewhere close to where they are based. This year it felt like they picked schools from a hat and just rolled with it. While it may create some fun matchups it will be interesting to see how some of these fans travel to further destinations.

The second big issue I has is how these regional locations were announced. We have selection Monday for a reason so why is the committee releasing regional hosts in the middle of conference championship games? It makes ZERO sense. In the middle of the Oklahoma/Texas game both teams are fighting for a Big 12 title and a chance to host a regional and they decided to release that information in the middle of the game. It’s a shame that they do that and for what reason? It’s not like they have a show or some segment on ESPN about it. All they did was tweet it. Maybe they should start putting the phone down and start watching these games from start to finish before making these types of decisions.