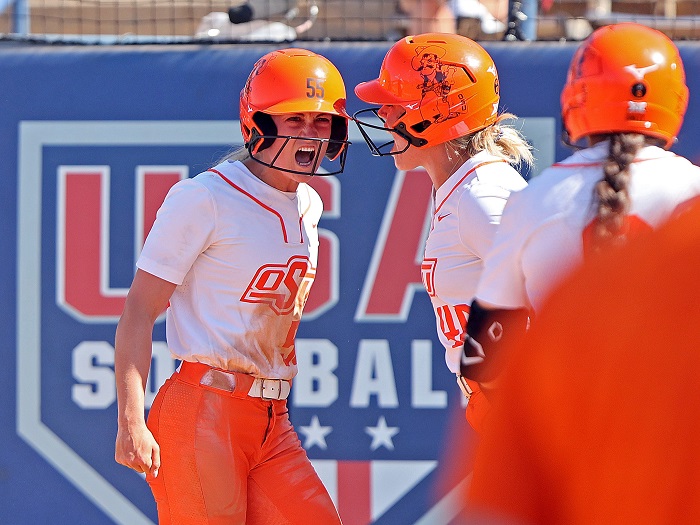 The Oklahoma State Cowgirls are one of eight teams left vying for the College Softball Crown and it has brought them back to Oklahoma City for a third-straight season.

The Pokes have made quite a run in the tournament, going a perfect 5-0 to get to the Women’s College World Series, and have been impressive along the way.

Kelly Maxwell has been absolutely amazing in the circle for Oklahoma State, having yet to concede a run in the tournament. Now, with the pressure of the largest crowd and the biggest stage or her career, it will be paramount to stay calm and collected, as she has been all season long.

Here is the road ahead for Oklahoma State and what they will have to do to guarantee they are on of the two teams standing at the end of next week.

The Road Ahead Looks Manageable, For Now

Oklahoma State looks like the best team in its side of the bracket right now by a fairly wide margin and that is a great way for them to start the WCWS. Arizona is their first opponent of the week, and the Wildcats have looked impressive recently, working through a bracket that included wins over Missouri and Mississippi State to get back to OKC.

If the Pokes take care of business against Arizona, and I believe they will, they will face the winner of Florida and Oregon State. The Gators took down No. 3 Virginia Tech in the Super Regionals and look like the team that could give Oklahoma State problems in their half of the bracket.

Outside of Florida, I believe that Oklahoma State is better than the other teams in their immediate bracket, but they are capable of being 2-0 on the weekend when Monday rolls around.

However, the greatest thing about the double-elimination format is that no one team has an “easy road” to the finals. Someone from the other side of the bracket, be it Oklahoma, Northwestern, UCLA, or Texas will flip sides and immediately become Oklahoma State’s biggest threat to reaching the Finals.

What Will Get the Cowgirls in the Finals?

Two words: Kelly Maxwell. Oklahoma State’s junior pitcher has been on a mission this postseason and is capable of pitching her team into the Championship series on her own. I am confident that she is the top arm in Oklahoma City right now, and that alone gives her team an edge every time they step on the field. Plus, Morgan Day has had an impact as well, solidifying herself as a solid arm for the Pokes and a perfect change of pace to Maxwell.

This, combined with the level of offense that Oklahoma State has shown it can play in the postseason behind Chyenne Factor, Chelsea Alexander, and Miranda Elish makes Oklahoma State one of may favorites to be playing for it all late next week.