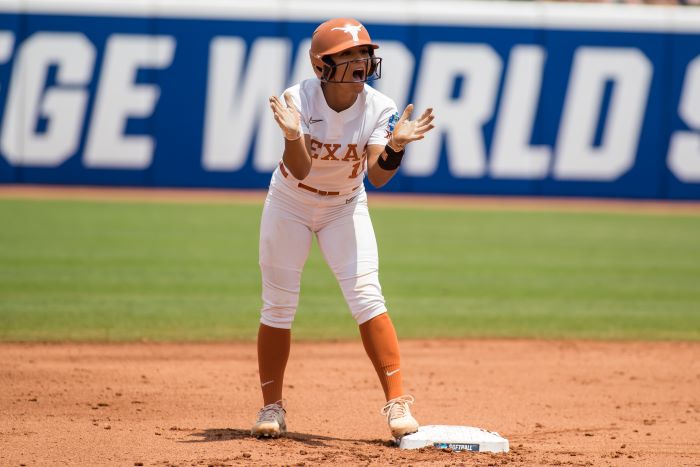 Texas kept its season alive with a win over the Arizona Wildcats on Sunday night, taking the contest 5-2 and setting themselves up in the national semifinals tomorrow afternoon.

There, they will face a familiar foe in the Oklahoma State Cowgirls, a team that has had their number this season. Nonetheless, this is the Longhorns first appearance in the semifinals since 2013 and they will be pumped for an opportunity to even their score with OSU by knocking them off track.

Here are three thought on the Longhorns massive win over Arizona on Sunday night and what it means for them moving forward.

The Longhorns’ have gone where Janae Jefferson and Mia Scott would take them offensively this postseason, but the story today was the bottom of the Texas lineup. Courtney Day and JJ Smith, both capable batters in their own right but not names that highlight the rotation, were the homerun hitters agaisnt Arizona, and were responsible for four of the Longhorns’ five runs.

Day’s home run came in the third with empty bases, and gave the Longhorns an early 1-0 lead, which was erased in the next inning by a 2 RBI single from Arizona’s Carlie Scupin. The big one came in Texas’ half of the fourth as JJ Smith went deep with a three-run shot that game Texas a 4-2 lead, which Bella Dayton extended to 5-2 in the fifth with a single. Yet again, Texas found a way to put points up and win by a safe margin, which has become a trend for them this postseason.

Estelle Czech Shuts Down the Wildcats

In the fourth inning, it looked like the Wildcat might do more damage then the Longhorns could recover from, as Dolcini had gotten in the bind. With two runners on and just one out, Estelle Czech stepped into the circle and brought some stability to the circle. As soon as she entered the game, Arizona’s momentum was squandered then and there.

Czech, in relief of Dolcini, went on to pitch 3.2 innings for the Longhorns, recorded four strikeouts and allowed just one hit the rest of the way. The most important stat: not another run was scored for the Wildcats, and that gave Texas the confidence, and time, it needed to keep their season alive.

Texas Closes Out My Argument for the Big 12

I have been beating the Big 12 drum all season long, saying that this conference was the queen of softball. Now, I don’t have to make that argument any longer, as my point has been proven for me. The Longhorns, along with Oklahoma and Oklahoma State, make up 75% of the teams participating in the national semifinals on Monday.

This league may have lacked the depth of other conferences, as it only has seven teams, but three of those teams have proven themselves to be at the top of this sport. Texas and and Oklahoma State had struggles at times this season, but brought it all together this postseason and that has landed them in a semifinal matchup for a spot in the National Championship Series.