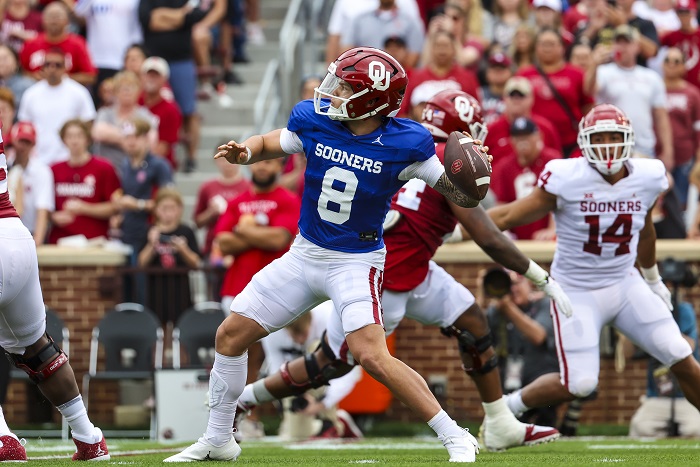 ESPN recently tiered all 131 FBS college quarterbacks and the Big 12 didn’t have a quarterback appear until Tier 4.

The article had Oklahoma’s Dillon Gabriel — who is a transfer from UCF — as a member of Tier 4, which ESPN titled ‘Definitely. Probably. Maybe.’

There were 15 quarterbacks ahead of Gabriel’s tier, including last year’s Heisman winner, Alabama’s Bryce Young, and one of this year’s Heisman favorites, Ohio State’s C.J. Stroud.

The selling point for Gabriel on this tier is that he’s back working with his former UCF offensive coordinator Jeff Lebby, who was at Ole Miss and tutored Matt Corral into an NFL quarterback.

Tier 5, called ‘So hot right now’ featured the quarterback battle at Texas between newcomer Quinn Ewers and holdover Hudson Card, along with Baylor’s Blake Shapen. Texas head coach Steve Sarkisian won’t decide on a starter until the fall. Shapen, meanwhile, won the job in the spring and led to Gerry Bohanon’s decision to transfer.

You have to go to Tier 9 to find Oklahoma State’s Spencer Sanders under ‘Tier 9: Veterans with moxie.’

After that, three Big 12 quarterbacks were on Tier 13, called ‘So you’re saying there’s a chance?’ That included the battled at Texas Tech between Donovan Smith and Tyler Shough, the battle at TCU between Max Duggan and Chandler Morris, and Kansas’ Jalon Daniels

The last Big 12 quarterback was on Tier 14, called ‘Is there a diamond in the rough?’ and that’s the race to replace Brock Purdy at Iowa State between Hunter Dekkers and Rocco Becht.