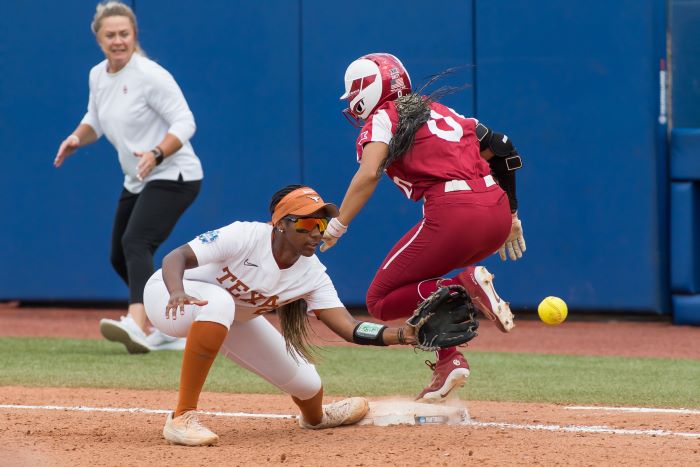 For the first time in Women’s College World Series history, two members of the Big 12 Conference will face off against one another in a best-of-three series to determine a champion for the 2022 season.

The Oklahoma Sooners and Texas Longhorns have met four times this season, with Oklahoma holding a 3-1 edge in those games, however, the Longhorns were the first team to give the Sooners a loss, breaking their NCAA record 38-game winning streak to being the season.

Now, with the other 62 teams in the tournament having been eliminated, the Red River rivals are the last two teams standing in Oklahoma City with the College Softball Crown on the line.

How They Got Here

Oklahoma Sooners (57-3, 17-1 Big 12) – The Sooners have been the most dominant team in softball this season, and perhaps in recent memory, compiling a winning percentage of .950 along the way. In tournament play, Oklahoma has taken out PVAMU, Texas A&M, No. 16 UCF, No. 9 Northwestern, Texas, and No. 5 UCLA to make the finals, winning by a combined score of 90-14 in the tournament. Their only loss of the tournament came against UCLA on Monday in a 7-3 defeat. However, the Sooners got the last laugh, pummelling the Bruins 15-0 in five innings to punch their WCWS Finals ticket.

Texas Longhorns (47-20-1, 12-6 Big 12) – The Longhorns found a groove in the NCAA tournament after they were snubbed from hosting a regional or super-regional, which likely worked in the Longhorns’ favor when all is said and done. Texas had to fight through the Seattle Regional, defeating No. 13 Washington, the Fayetteville Regional where they took down No. 4 Arkansas and then ran through No. 5 UCLA, Arizona, and No. 7 Oklahoma State in OKC. The Longhorns took losses to No. 13 Washington, No. 4 Arkansas, and No. 1 Oklahoma along the way, but bounced back in a big way against the previous two and will look to do the same against OU.

Over the course of the postseason, it became more and more apparent that Jordy Bahl’s health was going to remain a concern for Oklahoma throughout the tournament, but all that did was open the door for Hope Trautwein to become the Sooners’ bonafide ace in the circle. Trautwein has been wonderful in tournament play, as she was in the regular season, compiling a total ERA of 0.57 on the season with a 21-1 record over 121.0 IP. She will likely be the starter in Game 1 against Texas, whom she has faced twice and allowed eight hits and two earned runs against.

What more can be said about Jocelyn Alo? She is the back-to-back National Player of the Year and has been the most dangerous bat in softball for the better part of the last three seasons. In 2022, Alo has 32 home runs, 82 RBIs, and maintains a ridiculous .509 batting average and 1.189 slugging percentage. On Monday, against UCLA, Alo might have had her best day in a Sooner uniform, going 4-4 with 7 RBIs, including two home runs, one of which was a grand slam. Alo will play a role in the outcome of this series at the plate in what is her collegiate swan song.

The senior right-hander has been a key cog in the Longhorns’ postseason run this season, going 52.0 IP over the last 17 days, allowing 18 runs along the way which brings her ERA to 2.42 in the tournament. Dolcini has been an absolute warrior for Texas, with seemingly limitless stamina and drive to push through the pain of pitching back-to-back nights. Dolcini has been consistent in the circle, which in postseason play is sometimes better than being lights out one night and unreliable another, making her a key player to watch for the Longhorns.

The lineup for Texas has ebbed and flowed in Oklahoma City, but Janae Jefferson has been a constant threat this postseason. In the regular season, Jefferson hit just three home runs but has surpassed that number with four in the postseason, along with averaging exactly one run per game since the start of the tournament. Jefferson maintains a .416 batting average and a 1.125 OPS but her impact is not limited to the plate. Jefferson is a difference-maker in the field at second base and has routinely stretched the scope of her coverage into centerfield and the infield all season. She is a defensive anchor for Texas up the middle and has a major role to play in this series.

How Much of a Role Will Jordy Bahl Have?

As I mentioned before, Hope Trautwein has become the ace for Oklahoma this postseason, but a best-of-three series will require more than one arm, especially since the eight-run rule is not in effect in the Championship series, ensuring that all games will go to seven innings minimum. Quite simply, that means more pitches for everyone involved. If Jordy Bahl is ready to go, as Patty Gasso said that she is in media availability on Wednesday, then that means Oklahoma will have a dangerous arm back at their disposal. Bahl was good in her first real postseason experience against UCLA yesterday, going 4.2 innings in relief of Nicole May, giving up two earned runs and two walks, but striking out four and allowing just two hits.

Who Steps Up Behind Dolcini For Texas?

Estelle Czech was a great weapon for Texas over the weekend, giving them the ability to use somebody other than Hailey Dolcini in the circle. Dolcini has been amazing for Texas, as far as stamina is concerned, but the biggest concern I have for the Longhorns is who they will turn to when Oklahoma makes adjustments. The Sooners are the best team in the nation at making adjustments at the plate and it is only a matter of time before they lock on to what Dolcini is throwing and they start to do damage. Is Czech the answer, or do we see a reemergence of Sophia Simpson or even Shea O’Leary in the circle? Simply put, UT will need more than one arm to take down the Sooners.

It would take an otherworldly performance from the Texas pitching staff to take Oklahoma down in this Championship series, and I’m just not sure that they have that in them. The win over Oklahoma State was massive, but the Cowgirls’ offense had the tendency to go cold at times this season, and after a hot start in the first three innings, that’s exactly what it did. Oklahoma’s bats are simply too good for Texas to keep up in a best-of-three series, and I believe that will lift the Sooners to their second straight national championship and their fourth in the last six years.