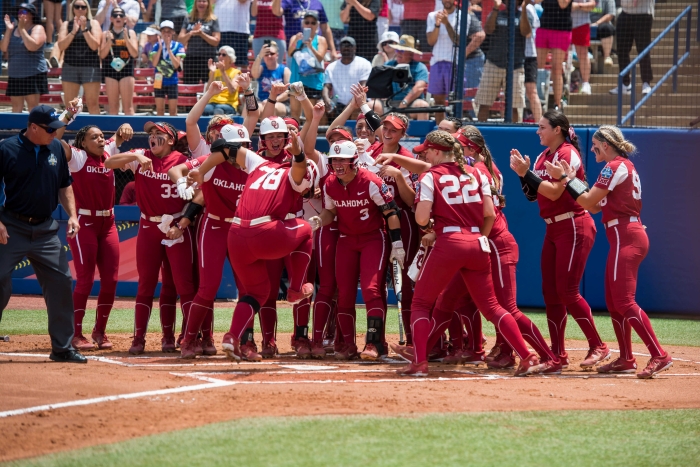 Oklahoma took it to Texas in Game 1 of the Women’s College World Series Finals, winning 16-1 in a contest that seemed over before it even began.

With the victory, the Sooners are just one win away from becoming the eighth team to win back-to-back titles, and the first time a team has done it since 2016-17 Oklahoma.

If Oklahoma is able to do that, it will be another reason that this team is forever in the history books, but it will be far from the only reason.

For starters, Oklahoma’s six home runs in the game were the most in a single game in WCWS history. Both Jocelyn Alo and Tiare Jennings hit two homers a piece, with Jana Johns and Taylon Snow also adding home runs of their own.

Jocelyn Alo also became the first player in WCWS history to have two multi-home run games a career, and she had hers in back-to-back games.

In their record-setting night, the Sooners also became the first team to break the 50 run mark at the Women’s College World Series, as they have now scored 54 runs in their five games in Oklahoma City. In tournament play alone, Oklahoma has scored 106 runs, which is more than 12 Division I softball teams scored in all of 2022.

On top of all of this, Sooner Nation showed up in droves as well, setting a new attendance record for the Championship Finals with an offical count of 12,234. While there were some Texas fans there, it was fairly clear that Oklahoma fans had the edge in numbers.

Three Thoughts on Oklahoma’s 16-1 Win Over Texas in Game 1 of the WCWS Finals
NCAA Baseball 2022 Super Regionals: Four Things to Watch For the Big 12
To Top