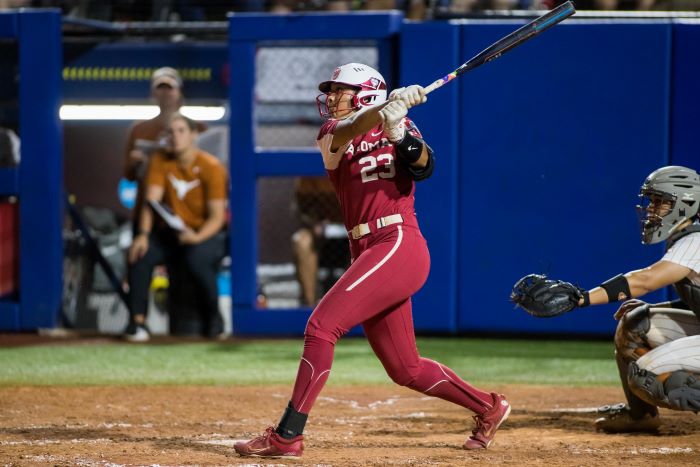 The Oklahoma Sooners’ offensive onslaught was quick, explosive, and unstoppable on Monday night as they dismantled the Texas Longhorns 16-1 to take Game 1 of the Women’s College World Series Finals.

Texas had no answer for the Sooners’ lineup at any point tonight as OU put up 16 hits against a total of four Texas pitchers.

With the victory, Oklahoma is now just one win away from claiming back-to-back National Championships.

Here are three thoughts on the Sooners’ victory and what it means for Oklahoma, and Texas, going forward.

The Oklahoma lineup is the closest thing to the 1927 Yankees’ Murderer’s Row that we have seen in softball, and the two and three-hole hitters showed exactly that against Texas. As a team, Oklahoma went 16-36 (.444) at the plate and put up 16 runs in six innings. Jocelyn Alo continued her domination of Hall of Fame Stadium on Wednesday night as she went 3-3 with two home runs, three RBIs, and five runs on the night.

Not to be outdone, Tiare Jennings one-upped her superstar teammate by producing four hits in five at-bats, five RBIs, and three runs. With her second homerun of the evening, Jennings actually overtook Alo as the national RBI leader with 85 to Alo’s 84.

When asked if they believed that they are the top hitting duo in the country, Jocelyn Alo was clear, ” Yeah, I think we are.”

The Longhorns M.O. this postseason has been playing clean, error-free softball, but today it was anything but. The Longhorns committed four errors, allowing Sooner base runners to advance and some to even make it across home plate. Texas was out of this game before it even started, as they spotted Oklahoma five runs in the first inning and didn’t keep the Sooners off the board the rest of the way as Patty Gasso’s squad put up runs in every inning of tonight’s game.

When Oklahoma is hitting like they did tonight, .444 as a team, it is impossible to keep up with the avalanche of points that they can put up. Texas needs to find a way to regroup and restrategize ahead of tomorrow’s matchup, because if they come out with the same gameplan that we saw on Wednesday evening, it will be the Sooners’ night yet again, and another trophy for Gasso to take back to Norman.

While Texas used four arms to get through tonight, with Hailey Dolcini (23 pitches), Sophia Simpson (8 pitches), Logan Hulon (46 pitches), and Shea O’Leary (63 pitches) combining to get through the night, the Longhorns did save their left-hander, Estelle Czech, who has been reliable for UT in Oklahoma City over the last seven days.

The Sooners also saved an arm, as Hope Trautwein (90 pitches) and Nicole May (29 pitches) combined for seven innings of work, leaving freshman Jordy Bahl ready to roll on Thursday if Gasso sees fit. A Czech vs. Bahl matchup tomorrow night seems like the most likely scenario at this point in time and while Oklahoma didn’t see her tonight, the Sooners have to feel good about their chances of putting up gawdy numbers again tomorrow with how they are swinging the bats.