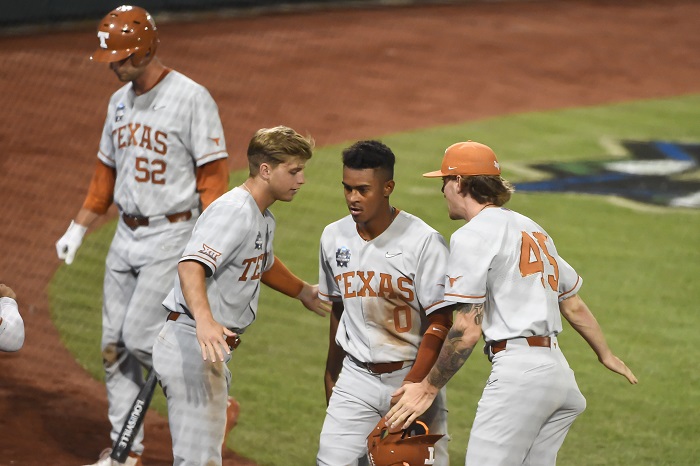 The college baseball postseason started with 64 teams playing for a chance to win it all. Last week, the field was cut down to 16 in the Super Regionals and now, the journey is complete as eight teams will make the trip to Omaha. The Texas Longhorns faced the Notre Dame Fighting Irish in game one and lost. On Sunday, they played their archrival Texas A&M and were eliminated from the College World Series. Here are my four thoughts on Sunday’s game

I am not sure what has happened to the Texas pitching staff since the regionals, but they have not been the same since they knocked out Air Force two weeks ago. Against East Carolina in the Super Regionals, the Longhorns top two pitchers struggled and that is exactly what happened this weekend in Omaha. On Friday against Notre Dame, Pete Hansen got the start and gave up six runs in just four innings. This time it was Lucas Gordon who started against the Aggies, and he couldn’t even make it two full innings. Gordon gave up four runs in just 1.2 innings on the mound and it really hurt Texas to have to use their bullpen so early in the game. Going into the postseason, I felt good about this Texas pitching staff and it has been a rocky road over the last five games. Today, the bad pitching finally caught up with this team.

I was asking the same question on Friday night when Texas played Notre Dame in their College World Series opener, but where was the offense for Texas? They scored three runs on Friday and only scored two on Sunday against Texas A&M. Texas’ top three hitters (Melendez, Messinger, and Stehly) had a total of 13 plate appearances in this game and none of them were able to get a single hit. I gave credit to the Notre Dame pitching staff in game one and you must tip your cap to the Aggies on Sunday. They were the better team, and their pitching staff was excellent as they kept a dangerous Texas lineup from heating up.

Errors haven’t really been a big issue for Texas because their defense has been great all season long. On Sunday, they had a few mistakes that proved to be costly. When you are in the College World Series, you can’t make silly mistakes. I felt like Texas just didn’t look like themselves against Texas A&M. Maybe the stage was too big for this team against their rival because it was tough to watch at times.

It seemed like Texas just got to Omaha and they are already out in the first two games. Last season, this team was just a win away from the finals and they didn’t even come close to that this year. I thought this Texas team had a shot to possibly win it all and instead, they played some of their worst baseball in Omaha.