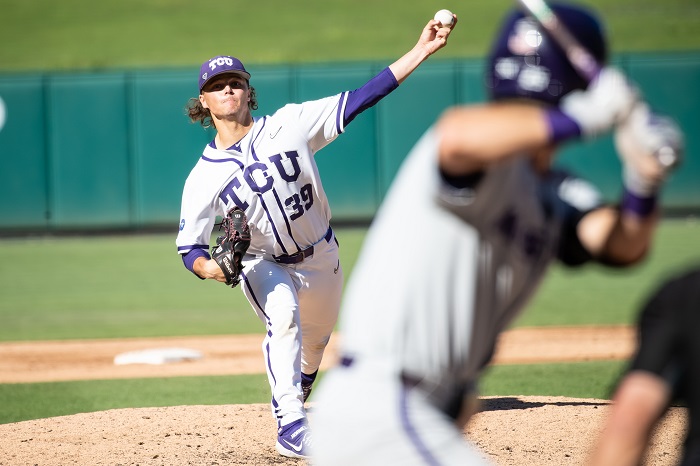 It was a good season for a TCU team that suffered massive turmoil in the offseason after losing longtime manager Jim Schlossnagle to in-state rival Texas A&M. All five of TCU’s College World Series appearances came under Schlossnagle, as did 15 of their 17 NCAA Tournament Appearances. He also won 13 Conference Titles in Fort Worth, but TCU and new manager Kirk Saarloos picked up right where the Schlossnagle era left off.

Well actually one step further in terms of conference records, as they managed an outright Big 12 title after a perfect scenario with Oklahoma taking two of three off of Texas Tech, and Oklahoma State dropped on to Baylor, leaving all three squads one game back. Add in TCU’s late collapse to Kansas State last season that saw them have to settle for a share of the conference, it would seem TCU’s luck turned after the pain of losing their longtime successful manager to Texas A&M.

Well, it had, until they saw themselves planning a trip to College Station for the regional.

Now it’s not necessarily a bad thing to have to play the manager that scorned you, after all, Texas Tech swept Chris Beard in basketball this winter. Rest assured every Oklahoma football fan would love to play USC this season if given the chance. The problem for TCU? It wasn’t just a one-on-one with A&M, they learned that quickly when the Ragin Cajuns out of Louisiana were their first matchup in the regional. As is the case in all these regionals a 2-0 start means you have two chances to advance vs a team with a worn-down pitching staff. If you win one, then lose one, you need to pick up three wins in two days, oftentimes two of those being on the road and against a better rested bullpen. If you drop the first one you need to win four straight in three days with no room for error. Unfortunately the latter is the scenario TCU had to face, after stranding two in the bottom of the ninth down 6-5 they’d fall into the near impossible challenge of having to win four games in three days.

Their pitching staff would hold up well against Oral Roberts in a 3-1 win that saw five TCU pitchers, and three of them pitch multiple innings. The next afternoon they’d get their revenge on Louisiana in a 6-1 win, and set up a date with former manager Schlossnagle, and the Texas A&M side that stole him away. As said before, winning four games in three days is tough enough, but at least the first two games the teams are operating with the same rest as you, the brutal part is finishing your second game on Sunday afternoon, and having a game that night against a fresh bullpen then if you survive that you have to beat them again the next day. Now the only thing that makes it tougher is when those games come against the host, add into that it’s A&M with a rabid fanbase, it’s a daunting task.

A task that for 8 full innings TCU looked like they could pull off. If after 8 innings you thought this was a TCU team was a group on a mission, and was going to follow a Big 12 title with a regional win over their old manager no one could blame you. Anyone who followed the Tech Texas basketball games had to thing we were on our way to a TCU baseball version of that except this one in the postseason. The Frogs jumped out to a 3-0 lead and Austin Krobb did his job leaving the game in the 6th, giving up just 2 earned and a 3-2 lead just 9 outs away. Then it all came undone in the 7th as Texas A&M would get to the exhausted TCU bullpen and take a 7-3 lead. But the TCU bats really made it look like destiny as they responded with four of their own in the bottom of the inning to tie it at 7. While A&M would take a run in the top of the 8th, TCU restored order by adding 2 and reclaiming their 9-8 lead, with three outs to go.

By the start of the ninth it felt like ESPN’s squeeze play whip around seemed like it was glued to College Station. About 90 minutes before 836 miles away, the only other Big 12 team attempting to pull off the 4 wins in 3 days, Texas Tech had fallen short in a tight loss to Notre Dame. But unlike Texas Tech, TCU had led most of the game, their bats seemed to be on fire, and it just seemed like it was written that they’d pull it off. But there’s a reason that it’s so tough to get through that double header, and TCU had to face that head on in the ninth.

The Inning That Ended It All

River Riddings would take the mound for the Frogs looking to force a regional Game 7, after putting two on he’d be yanked after 41 valent pitches in favor of Caleb Bolden, who would have an inning to forget. Troy Claunch would bring in Austin Bost to tie it and leave men on the corners with no one out. Next up he’d surrender a walk and load the bases, they’d then get an out but surrender the go ahead run and fall behind 10-9, but with TCU’s bats it was still far from over. But another walk would load the bases again, then a Moss base hit would score two and make it 12-9, with two on and just one out, the bubbles were starting to fill the sky. Next up Rock would lift one over Boyers glove to right to extend the lead to 14-9, after a Bost single that would extend the lead to 15-9, a worn down Bolden was mercifully removed from the game and Drew Hill would come in and finish out the inning. By this time TCU’s season was all but over with bubbles filling the air in College Station. They’d go down quietly in the bottom of the ninth, with the last three outs becoming an effective victory lap for the Aggies and Schlossnagle.

It was a brutal exit for the Horned Frogs after a great season that showed this program still has plenty of life, and will be a force both in the Big 12 and nationally under Kirk Saarloos, but the ending was as brutal as it comes. While Schlossnagle elevated  TCU, and probably left at a decent point for both, and TCU baseball is still in great shape. To have your season end to your former manager and in-state rival, especially that fashion is truly as tough as it comes. Add into that the Aggies are still going in Omaha, and football season just can’t get here quick enough for TCU.