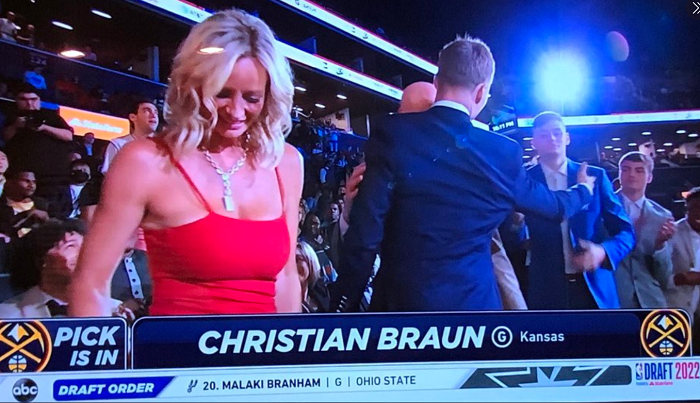 The NBA Draft took place on Thursday night and two Kansas Jayhawks were drafted in the first round. Ochai Agbaji was expected to be a first rounder, but when Christian Braun was selected by the Denver Nuggets, it came as a bit of a surprise, as he was a borderline first round selection.

But that was not as big of a surprise for NBA fans who don’t follow Big 12 basketball as when they were introduced to Christian Braun’s mom.

Needless to say, she went viral.

Here were some of the other takes as social media went off on Lisa Braun (in a great way), who herself was a basketball star at Mizzou (1987-1991), where she earned All-Big Eight honors three times, and is in the Missouri Sports Hall of Fame.

Oh and just for the record, we were ahead of the curve on this during the Kansas baskeball season.

As for Christian, he averaged 14.1 points, 6.5 rebounds, and 2.8 assists per game last season, all of which were career-highs. Braun was considered one of the best rebounding and defensive guards in the Big 12 last season.

Braun started two of his three seasons for the Jayhawks and helped Kansas win the national championship in April. In the Jayhawks’ semifinal win over Villanova, he became the 65th player to score at least 1,000 point for his career. He was named to the NCAA Tournament All-Midwest Region Team, the All-Big 12 Tournament team and All-Big 12 Second Team honors.