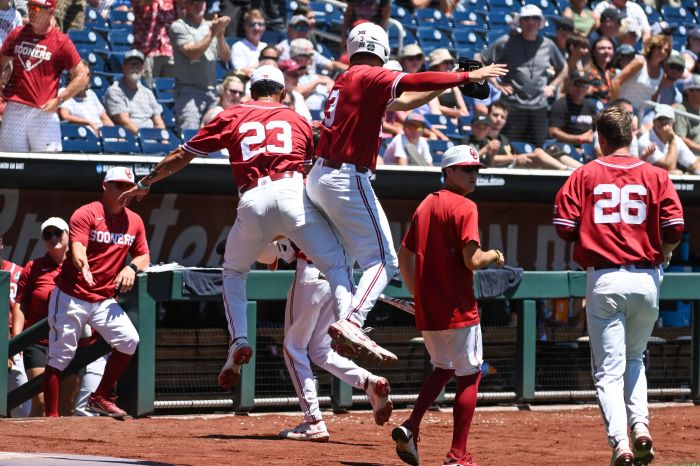 The college baseball postseason started with 64 teams playing for a chance to win it all. Then the field was cut down to 16 in the Super Regionals and last week eight teams made the trip to Omaha.

Now we are down to the final two teams as Oklahoma and Ole Miss will play a best two out of three series to crown a national champion.

The Sooners started their trip to Omaha with three straight wins. They beat Texas A&M twice and Notre Dame to get here.

Meanwhile Ole Miss had to beat Auburn and Arkansas twice to make it to the finals. It’s going to be a fun series and here are my four things to watch in the NCAA Baseball College World Series finals.

1. Can The Sooners Stay Perfect in Omaha?

It takes a lot to make it to the final round in Omaha and the way this Oklahoma team has played this postseason has been incredible. Not only are the Sooners 12-2 in their last 14 games but they are a perfect 3-0 in the College World Series.

They had to beat a tough Texas A&M team twice and took down a veteran Notre Dame squad. Not only are they winning these games, but they have done it in style. They have won all three of their games by at least four runs or more and have looked dominant throughout the last week.

This team has a ton of momentum right now and has been on fire over the last two months. Call it “Sooner Magic” or whatever you want, because this team is playing some great baseball right now.

Whenever teams have to play that extra game, it gets a little bit trickier to figure out the pitching situation. That is especially true when teams don’t have a bunch of arms ready to go.

For Oklahoma, it worked out perfectly. It only took them three games to get here as they used Jake Bennett, Cade Horton, and David Sandlin. That’s been their three top pitchers this season and they will get the chance to use all three of them if needed. Jake Bennett is their ace and will get a full week of rest. The same goes for Cade Horton and if this goes to a game three, then Sandlin will likely get the ball for that one.

In short, Oklahoma’s starting pitchers will be well rested while Ole Miss just had to use their ace Dylan DeLucia to get past Arkansas on Wednesday night.

Also, the three starting pitchers for Oklahoma have a combined 26 strikeouts in their three games while the entire staff has 34. Whether it’s the bullpen or the starters, this team is playing well on the mound.

I know Ole Miss has some great hitters with Justin Bench, Tim Elko, and Jacob Gonzales but Oklahoma has the better offense. The Sooners have four players (Peyton Graham, Blake Robertson, Jimmy Crooks, and Tanner Tredaway) batting over the .300 mark, and they have had two key freshmen step up in Omaha with John Spikerman and Jackson Nicklaus. Oklahoma’s offense has been on tear for awhile now and they have scored 24 runs so far in Omaha. I know the Sooners have had some great pitching lately but don’t forget just how good this offense really is.

I feel like in almost every game this postseason, Oklahoma has found a way to score runs quickly. I’ll be watching a game and before you know it, they have a 4-0 lead in the second inning. The Sooners have scored a whopping 14 runs in the first three innings of their games in the College World Series. Whenever you can get out to an early lead, it not only helps build confidence in the offense, but it also helps the pitchers out as well. Oklahoma has used their fast starts to win a lot of games this season and I will be curious to see if they are able to get ahead early against a good Ole Miss team.