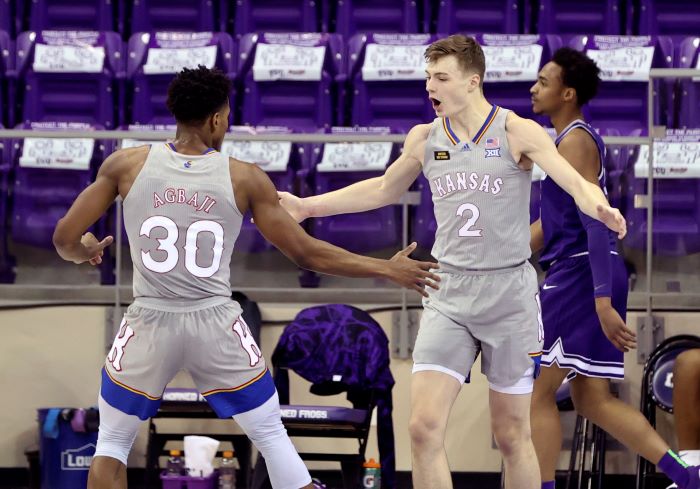 When former Kansas Jayhawk basketball standouts Ochai Agbaji and Christian Braun heard their names called Thursday night during the first round of the NBA Draft, they were all smiles. Agbaji was taken as the final lottery pick at No. 14 to the Cleveland Cavaliers and Braun was selected No. 21 overall to the Denver Nuggets.

The path both of these gentlemen took to get there went through Lawrence, Kansas. However, coming out of high school, there wasn’t a great sense that either of these players would be first round draft picks.

Agbaji and Braun’s Journey to Lawrence

It wasn’t until Agbaji’s senior season at Kansas City’s Oak Park High School that he started drawing the attention of NCAA DI schools. Seen as a three star prospect, he never even got an offer from his home state’s University of Missouri. By the middle of his senior season, he had offers from Texas A&M, Oregon, Oregon State, Oklahoma State, Wisconsin, and Kansas.

Once Kansas entered the discussion, the conversation was over. Agbaji knew it was where he wanted to go. Kansas offered one of the best college basketball experiences and was the closest to home. It was a decision that would alter the rest of his life for the better.

Growing up in the small town of Burlington Kansas, Braun always knew he wanted to play at the University of Kansas. He looked up to former Jayhawk Tyrel Reed, who was also from Burlington. Despite his desire to one day join the Jayhawks basketball program, he still had to earn that scholarship offer through his play on the court.

He did just that throughout his high school career at Blue Valley Northwest in Overland Park, Kansas. He led his team to multiple state championships and won the Kansas Gatorade Player of the Year award for the 2018-2019 season. He averaged 28 points, nine rebounds and four assists per game his senior year at BVNW. Along with the University of Kansas, he also had offers from Illinois, Missouri, and Kansas State. However, the choice was always going to be KU.

Early Stuggles for Both Leads to Later Success at KU

It wasn’t immediate success for either player during their freshman year at Kansas. Agbaji was actually supposed to redshirt during his freshman year before being thrust onto the active roster and eventually into a starting role. It ended up being a blessing in disguise for Agbaji, who ended up averaging 8.5 points per game that season.

Braun averaged 5.3 points and 2.9 rebounds per game off the bench during his freshman season at Kansas. It was good enough to earn himself Big 12 All-Freshman honors. Both players continued to rise and get better with each passing season. Agbaji averaged 10 points his sophomore year, 14.1 points his junior year, and 18.8 points per game his senior season. Braun’s averages steadily increased as well with 9.7 points and 5.4 rebounds his sophomore season and 14.1 points and 6.5 rebounds his junior season.

Agbaji led the Big 12 in scoring and was rewarded for his efforts. He was named Big 12 player of the year as well as consensus first team All-American. He was also awarded the NCAA Tournament’s most outstanding player.

Braun’s accolades weren’t as prolific, but he was named first team All-Big 12 after his best season as a Jayhawk. The role Braun took on this year showed his versatility, being able to play the 1-4 spots on the court, as he was asked to defend anyone head coach Bill Self threw his way. His stock continued to rise throughout the draft process.

While Agbaji was projected to be drafted on the edge of the lottery, and he ended up being taken right around where he was projected, Braun was projected to go early in the second round as late as Thursday afternoon, the day of the NBA Draft. The betting odds heading into the day were +450 that Braun would be taken in the first round.

Not only did Braun go in the first round, but he nearly went in the Top 20. The Denver Nuggets took a chance on Braun and will look to his versatility and help him progress and push his game to another level. Being drafted to a team that has been a consistent playoff team and has the reigning MVP should be a good fit for Braun to be able to learn and gradually get into the mix. Agbaji will likely be looked at as a player who will be more inclined to get more playing time early and could benefit from being a team that needs more immediate scoring help. There will still be a learning curve, but Agbaji has the mentality to put in the work and get to where the Cavs need him to be.

The two former Jayhawks could have come back for one more season at KU. Agbaji had already been through four seasons and didn’t need to use the final year of eligibility that was available to him. Some thought Braun could have come back to Kansas for his senior season to try and run it back and have a chance at back-to-back National Championships.

At the end of the day, Agbaji and Braun both made the best decisions for themselves and their families. Agbaji was a lottery pick and Braun was drafted higher than most projections had him going. It will be exciting to follow the trajectory of their careers at the next level and see which way their path winds on the NBA scene.