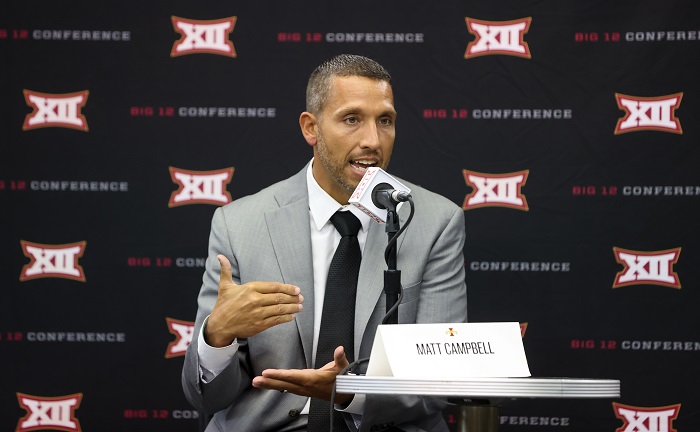 With that spirit in mind, here are three questions about Matt Campbell and the Iowa State Cyclones ahead of Big 12 Media Days.

When you look at the all-time great quarterbacks in Iowa State history there are two that come to mind. Those two are Seneca Wallace and Brock Purdy. While Seneca was a solid quarterback, Brock Purdy owns just about every Iowa State school record imaginable as he started for nearly four full seasons for the Cyclones. With Brock Purdy off to the NFL all eyes have now shifted to Hunter Dekkers. Hunter came into Ames as a four-star prospect back in the 2021 class. He is a dual threat quarterback who can hurt defenses with his legs and believe it or not, he actually has a stronger arm than Brock Purdy. It’s going to be interesting to see Hunter take over the starting job and there is a lot of of upside with him being the guy at quarterback.

Who Will Step Up at Running Back?

Much like the quarterback position, who is going to take over for Breece Hall? The run game has been a key part of Iowa State’s success over the last few seasons and Breece Hall was the rock of that offense. Hall won numerous awards in the last two seasons and was one of the best running backs in all of college football. The easy answer to this question has been veteran Jirehl Brock who has been sitting behind Hall over the last few years. We got a glimpse of him in the Cheez-It Bowl against Clemson but he didn’t get a chance to do much. Or could a guy like Eli Sanders step up as a freshman? No matter who gets the carries in the backfield, they will have some big shoes to fill.

Will There Be a Drop Off?

Last season was supposed to be the year where Iowa State got their revenge against Oklahoma to win a Big 12 title. They had everyone coming back from Brock Purdy to Charlie Kolar and instead of going back to Arlington, they ended up with a 7-5 regular season record with a trip to the Cheez-It Bowl. Now they have to replace Brock Purdy, Breece Hall, and Charlie Kolar on offense but return several key players up front and their top two receivers in Jaylin Noel and Xavier Hutchinson. On defense, Will McDonald returns but there will be plenty of new faces that have to step up on that side of the ball. Is this another 7-5 type of year or will this team shock everyone and climb up the Big 12 ladder once again?