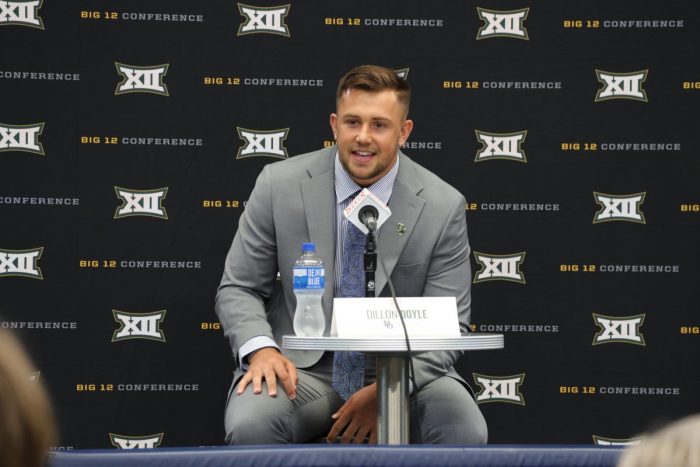 One could make the argument that the Baylor Bears had a good case to join the four-team College Football Playoff field a season ago.

Had Baylor avoided its 30-28 loss to TCU, the Bears could have finished the season 12-1 with a Big 12 title and its revenge win over Oklahoma State in the Big 12 title game.

Instead, the Bears finished 11-2 with that Big 12 title and ended up seventh in the final College Football Playoff rankings. The Bears did earn a trip to the Sugar Bowl, beat Ole Miss, and finished 12-2.

If there’s a perception that the CFP committee was unfair to the Bears, or to the Big 12 in general, Baylor linebacker Dillon Doyle doesn’t agree — or he’s just too polite to say.

“I don’t think I can speak for the standard that the Big 12 is held to, but I know we need to win and I know we need to play good football and I don’t think that the college football playoff committee is not reasonable,” Doyle said. “I think they’re very reasonable, and so I think if we play good enough football I think we’re gonna get in, but I’m not really worried about that right now.”

Doyle was second in the team last season with 90 tackles and is projected as the Bears’ starting middle linebacker for 2022.

“I’m worried about you know, finishing the summer and playing those games because I think people expect us to walk out there and win 12 games or whatever,” Doyle said.  “But it’s a blank slate like I talked about, it’s a clean canvas and we have to go beat Albany on (Sept. 3).”

The Bears return 11 starters overall, but many of Baylor’s top returnees are on defense, including Doyle, who has now played 23 games for Baylor, and massive nose tackle Siaki Ika, who once played for Aranda’s defense at LSU. The Bears must replace some top talent on defense, though, including safety Jalen Pitre and linebacker Terrel Bernard, both of which were All-Big 12 last season.