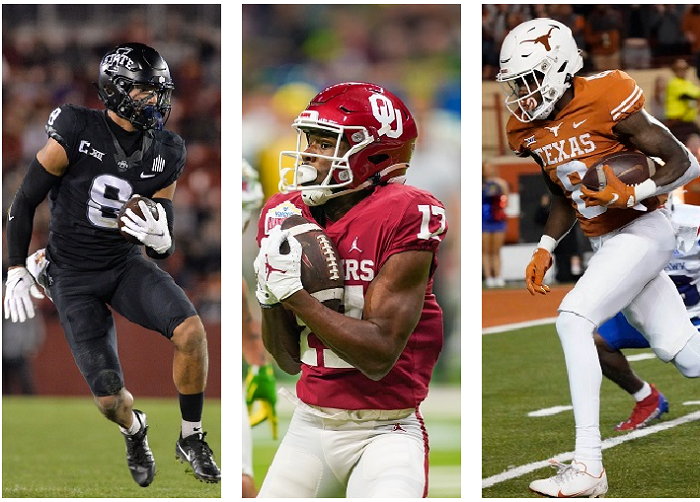 Kickoff is right around the corner as the season is set to start in September. Before the games arrive, I thought it would be fun to take a look at some of the best players in the Big 12 at each position. Today, it’s time to rank the top five wide receivers in the Big 12 Conference!

When Xavier Worthy stepped foot in Austin, he made an instant impact. As a true freshman last season Xavier caught 62 passes for 981 yards and led the Big 12 with 12 touchdown grabs. Much like his teammate Bijan Robinson, Xavier is explosive with the football in his hands. Worthy went over 100 yards in four games one season ago and now looks to up that number with Quinn Ewers throwing him the football. If you are looking for someone to lead the Big 12 in receiving yards, then this is your guy.

Despite playing in just eight games last season, Quentin Johnston still made his presence felt on the field. Standing at 6’4”, 215 pounds, he’s already got the size to scare people, but he is also a great athlete. In fact, Bruce Feldman put Quentin on his college football freaks list for 2022. Johnston finished 2021 with 634 yards and 6 scores in his shortened season. What has been really impressive during his time in Fort Worth has been his average yards per catch. In 2020, Johnston averaged 22.1 yards per catch and in 2021 he averaged 19.2. TCU Head Coach Sonny Dykes will find ways to get Quentin the football and I fully expect him to have a career year in 2022.

There may be two people ahead of him on this list but make no mistake, Xavier Hutchinson is the real deal. He led the Big 12 in receptions last year and finished second in receiving yards. He’s a two time All-Big 12 selection and will likely be a third at the end of this year. Xavier has great ball skills and at times has really taken over games. In all honestly, these first three guys are truly interchangeable because you could put them in any order and make a case.

I thought last season was going to be a breakout year for Marvin Mims, but things didn’t go according to plan in Norman. He had some big games last season against Tulane, Texas, and Texas Tech but his production was down across the board. Why? Because the man simply didn’t get the football. Marvin had just 32 receptions last season which was actually two short of his freshman season in 2020 and that was a shortened year. He had three or fewer targets in nine games last season which is completely unacceptable. I know Oklahoma had plenty of problems last season and some of those would have been solved if Marvin was more involved in the offense. He should be one of the biggest beneficiaries of the new Jeff Lebby offense in Norman.

Bryce has gotten better ever season he has played in Morgantown. His numbers have gone up, but this should be the year where takes his game to another level. Last season, Bryce caught 42 passes for 575 yards and 3 scores. Now with Winston Wright Jr. off to Florida State, Ford-Wheaton should be getting more targets. Also, quarterback JT Daniels should provide a big upgrade in the passing game as well. He is a big wide receiver who has plenty of experience and much like Marvin Mims with Jeff Lebby, Bryce should play a big role in the new Graham Harrell offense.