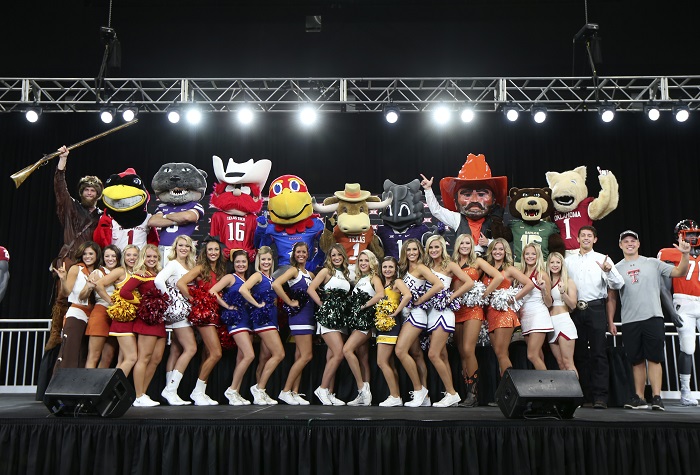 That’s because starting in 2023, the four new programs, UCF, Cincinnati, BYU and Houston are set to join the league. And while Oklahoma and Texas are set to stay in the league until 2025, in today’s landscape, there’s no guarantee that will actually happen.

So this 2022 Big 12 football season will be the last year of a round robin in football and a double round robin on basketball, because no matter what happens with OU and Texas, the four new Big 12 teams will change the scheduling landscape.

Now don’t get me wrong, I’m so excited for what the future of this league is going to look like. I believe it will remain the third-best football conference in America and could very well remain a top-two conference in college basketball.

But it will feel different, there’s no doubt about it.

When Nebraska, Colorado, A&M and Missouri left, it was tough, and it was weird, for a bit. But still having eight of the original teams in the league, with Texas and Oklahoma as the anchor blue bloods, the Big 12 still felt like the conference it was prior to those four teams leaving. Then, add in TCU, who Big 12 fans knew well, along with West Virginia, who was a cultural fit, and the Big 12 seamlessly transitioned itself into the current 10-team league it has been now for over a decade.

However, when Oklahoma and Texas leave, and the four new teams come in, with only Houston having any tie to the league from its old Southwest Conference days, it won’t be as easy of a transition.

It will feel different.

And that’s OK. I’m thrilled to get to tap into the Florida market thanks to UCF. I can’t wait for a road trip to Provo, Utah. Houston vs. Baylor/Texas Tech/TCU will harken back to the SWC era. And adding Cincinnati, which allows the Big 12 to welcome the Ohio Valley Region further into the league with West Virginia, will be great for the league.

However, it will continue to make the Big 12 feel less and less like, well, the Big 12.

And while the new fan bases are going to be great to interact with and will be fun to get to know, it will be another reminder and transition to a world where college sports, specifically college football, continues to feel more like pro sports and less like what the sport was always intended to be.

Who’s to blame for that is a dissertation we can save for another time, as this piece is more of a reminder to put a little extra emphasis on enjoying this fall.

So as we head into the 2022 Big 12 football season, let’s enjoy this one final ride together. A ride for especially eight of these fan bases (sans TCU and WVU), who have been together for over 25 years. These eight have been through the wars together.

So two things can be true at this same time: 1) We can still enjoy what’s left of this league that has remained as connected to its roots as any in college athletics for over a quarter of a century. 2) I can’t wait for the future of this league, Brett Yormark’s direction and vision for it, and what’s to come in 2023 and beyond.

But for nostalgia’s sake, I’ll take this time to focus on No. 1.