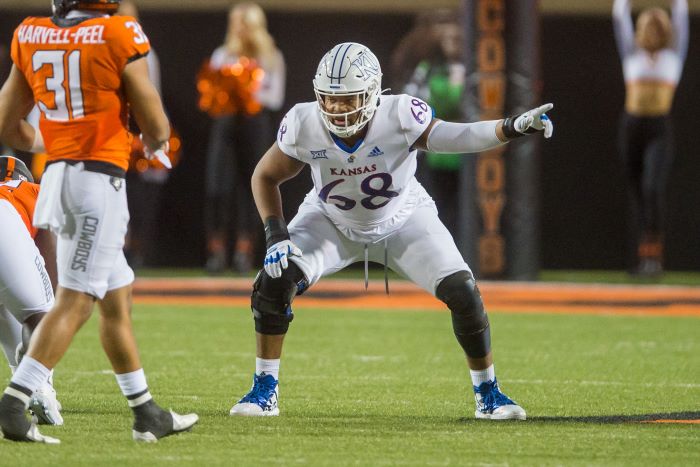 The University of Kansas football team practiced in front of fans last Saturday as they continue to get ready for the season opener against Tennessee Tech. That will be a home game at David Booth Memorial Stadium on Friday, September 2nd at 7:00 pm.

The players were excited to get in front of a crowd as students were coming back to campus to get ready for the start of the school year. The team and coaches can feel the enthusiasm both in the locker room and from other students and fans who were able to attend.

The projected starters on the offensive line include the leader of the line, Earl Bostick Jr, Michael Ford Jr, Mike Novitsky, Armaj Reed-Adams, and Bryce Cabeldue.

Defensive end transfer Lonnie Phelps, who is projected to be the Jayhawks’ top pass rusher in 2022, has been especially impressed by Bostick, an NFL prospect who is anchoring the Jayhawks’ offensive line.

Phelps has been wowed by Bostick’s footwork, power, and speed. Seeing a 6-foot-6, 310-pound offensive tackle running at you would be a cause to make anyone pause, but Phelps enjoys the challenge.

Bostick and Phelps have been pushing each other every day in practice. Their one-on-one sessions are the highlight of their day. They love the competition, helping each other get better, and are hoping the results will show out on the field.

Bostick is set to help the Jayhawks’ running game, a unit of running backs that is expected to be one of the deepest in the Big 12, in a big way. Kansas will look to get the ground game going early and often this season and Bostick will play a big role in the way that plays out.

Bostick could have gone to the NFL last year but wanted to stick around for one more season to be a part of changing the KU football program and building it up for the future. Leaving a legacy was huge for Bostick.

Everyone is buying in. So much so that the Jayhawks were able to land former Louisville offensive lineman Kobe Baynes through the transfer portal.

Baynes chose Kansas as his transfer destination after entering the transfer portal on August 16th.

He is applying for an NCAA waiver that would allow him to have immediate eligibility. There is a chance he could have the opportunity to play in 2022.

This would be a huge boost to the Jayhawks’ offensive line depth. Adding a 6’4” 300-pound player can only be viewed as a positive. On top of that, he’s a redshirt sophomore and will have three years of eligibility remaining, whenever he is cleared to play.

The coaches showed a great amount of enthusiasm for his versatility along the line. He can play guard, right tackle, or left tackle. Leipold has said all offseason that having offensive linemen who can play multiple positions will greatly enhance the offense’s ability to play at a high level.

Dominick Puni, a transfer from Central Missouri, and Deondre Doiron, a transfer from Buffalo are two new faces that can fill those versatile roles off the bench. They will be ready to play immediately when called upon, giving the bench that much-needed depth for 2022.

With Bostick leading the way of a veteran offensive line, and a steady group of new additions behind them, the Kansas football program has another piece of the puzzle to be cautiously optimistic about heading into the season.