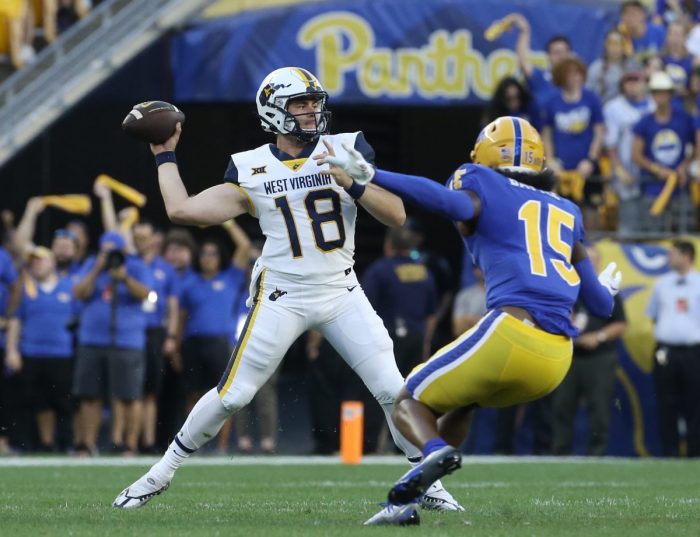 The college football season is upon us, and Big 12 football is back! On Thursday night, the conference opened up with two games which included an old rivalry.

After 11 years of not playing, the Backyard Brawl kicked things off for the Big 12. West Virginia traveled to Pittsburgh to renew this classic rivalry and there was plenty of drama from the Steel City.

It was a great game and of course it was nice to see these two schools play each other once again. Unfortunately, West Virginia came out on the losing end of this one. Here are my three thoughts on West Virginia’s 38-31 loss to Pitt in the Backyard Brawl.

Some people may look at JT’s stat line and blame him for the loss but that shouldn’t be the case in this one. I thought JT Daniels made some solid throws and even had some good ones while he was under pressure. And speaking of being under pressure, JT had defenders all over him too many times on Thursday night. The offensive line couldn’t handle the pass rush of Pitt and it only got worse as the game went on. Also, drops are still a big issue for West Virginia. For whatever reason, over the last few years it seems like the Mountaineers have had a problem catching the football. That problem once again reared its ugly head in this game. There were way too many dropped passes and one ended up as a pick-six that gave Pitt the lead late in the game when a ball bounced off the hands of Bryce Ford-Wheaton. JT Daniels is a good quarterback, but he needs some help from both his offensive line and receivers moving forward.

I know Neal Brown isn’t a bad coach, but I felt like he could have managed the game better than he did. Late in the game there were two interesting decisions that were made by him. First, West Virginia had a fourth and one from the Pitt 48-yard line with 6:17 on the clock while being up by seven. I thought he should have been aggressive there and went for it but instead, the offense took a delay of game penalty and ended up punting. Pitt would go on to score to tie the game on the very next drive and West Virginia had a chance to potentially ice the game.

Then later on, the clock management was awful on West Virginia’s final drive. The offense had the ball at the Pitt 22-yard line with 1:10 left to play down by a score. JT Daniels was sacked and instead of Neal Brown using one of his two timeouts, they took their time getting to the next play. In a total of 36 seconds, West Virginia only ran one play. That is unacceptable when there is less than a minute to play and you are trying to score.

Also, I am not entirely sure what happened here, but Neal Brown seemed to be pretty heated after the game towards the refs.

3. Bring Back the Backyard Brawl Every Year

It’s been 11 years since these two programs have played against one another on the football field. Despite being just 75 miles apart, it has taken way too long to get this old school rivalry back. This game turned out to be the largest Pitt football crowd ever with over 70,000 fans in attendance and they even ran out of beer!

What a game and what an atmosphere. I can’t wait for the rematch in Morgantown next season. The good news is that we will get three more games between these two schools and four more between 2029-2032. I say they play this game every single year because college football fans deserve it.