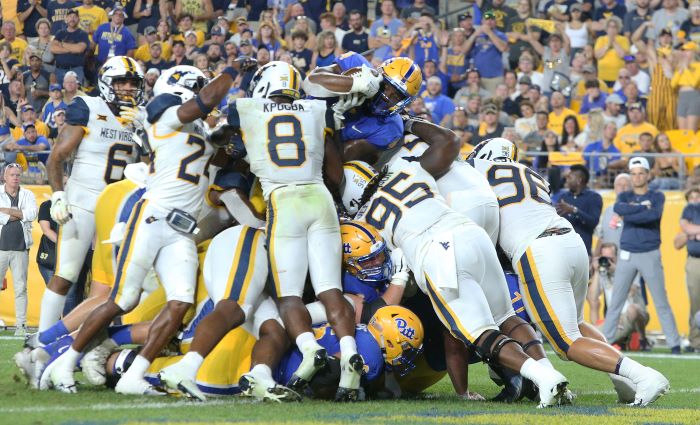 Last night I sat in my recliner as a Big 12 fan and kicked my feet up to watch the 2022 season get underway. The West Virginia Mountaineers and Pitt Panthers were my choice to get things started and it didn’t disappoint as we all witnessed what might be one of the best games we see all season long.

a hate-charged heavyweight title bout broke out in Pittsburgh last night as lead changes, momentum swings, and flooded renditions of “Sweet Caroline” broke out in Acrisure Stadium. And while the play on the field was certainly a big reason why, the atmosphere that surrounded the first Backyard Brawl in 11 years proved that college football is better when rivalries are at the center of it all.

The last wave of conference realignment just over a decade ago has taken some of the best rivalries in the sport away from us.

Oklahoma-Nebraska. Texas-Texas A&M. West Virginia-Pitt. Missouri-Kansas. Hell, we saw a 96-year streak of Arkansas vs. Texas end in 1990 when the Razorbacks left the Southwest Conference to go to the SEC.

Now, with another wave of realignment headed for us, we will see games like Texas-Texas Tech and even Bedlam between Oklahoma and Oklahoma State fall to the wayside.

Will there be new rivalries born? Sure. That’s just a reality of yearly competition. But will Oklahoma State vs. Cincinnati really scratch the same itch that Bedlam does?

The problem with the current trend in college football is that geography isn’t being taken into account when realignment decisions are being made. Do we honestly think that USC fans are going to travel in droves to watch the Trojans play in Columbus, Ohio in late November? What about UCF traveling across the country to face BYU? While they are a truly loyal fanbase, a 2,321 mile gap between Orlando and Provo will likely keep many Knights’ fans at home that weekend.

When the powers that be toy with the notion that money is the only thing that matters, it runs the risk of turning college football into something like the professional model. There are plenty of things wrong with the NFL, but one of the biggest issues, for me, is the manufactured rivalries. What do people in San Diego, California and Kansas City, Missouri/Kansas really have beef about?

The genuine hate between Pitt and West Virginia dates back to the coal miners and steel workers beef with one another. Cityfolk vs. Townfolk.

Oklahoma and Oklahoma State are separated by 82 miles and hate each other all year long, not just for one weekend in November.

Can we find a way to play these rivalry games every year, even if they are out of conference? I sure hope so. Iowa State-Iowa, Clemson-South Carolina, Florida-Florida State, and of course Army-Navy are some of the best examples of nonconference rivalries and give us some hope that those games can still happen.

The rivalries aren’t just a game, they make sports fans who they are. They are what separates us, and then brings us all together in a tightly packed bowl to watch something that happens one time every 365 days. That’s not something that can be manufactured, and taking it away from the sport diminishes what makes this sport the best on earth.

Can college football go on without those rivalries? Yeah, it can, but do we really want to watch that happen? Conference realignment threatens to take those away from us, and if schools don’t work out a way to keep playing geographical rivalries, the sport will lose some of its integrity.

My hope is that we don’t lose sight of what is important with all of the change and moving parts in college football in 2022. Unfortunately, I think it is too late turn this train around and all we can do is hope that the people in charge find a way to keep the games that mean the most from becoming a page in history.