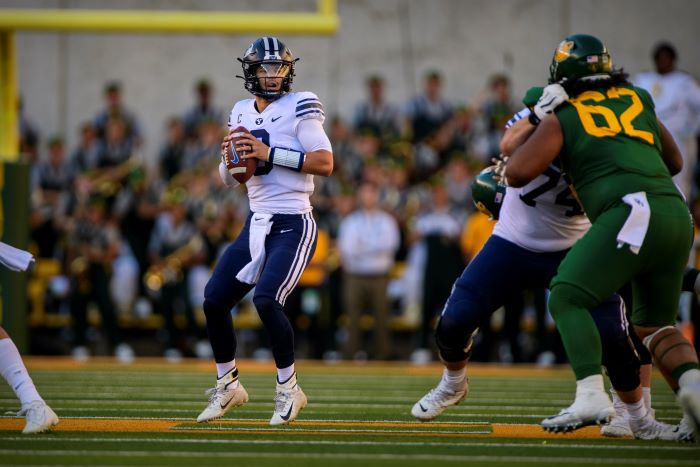 Here is everything you need to know about the upcoming matchup between the Baylor Bears and the BYU Cougars.

Fun Fact: Anyone who follows college football knows this. But the Bears and Cougars may meet each other next season — as Big 12 Conference foes. BYU joins the league in 2023. It’s not clear if the pair will play.

Four starters are back from last season — Connor Galvin, Grant Miller, Jacob Gall and Khalil Keith. BU has one of the most experienced O-Lines in the country. Another player has at least eight starts. Only eight schools returned five offensive line starters and only 31 schools had four returning. The line’s 171 combined games played is second in the country. It showed against Albany, as the Bears pummeled the Great Danes up front.

You’ve heard of Jalen Pitre, right? He played the ‘STAR’ position for the Bears, won Big 12 Defensive Player of the Year last season and became an NFL Draft pick. Well, Walcott is playing the position this season after spending three years at cornerback. Walcott returned that interception for a touchdown in the Sugar Bowl against Ole Miss. He’s in a position to shine this season. He had four tackles against Albany. Expect that to go up this week.

The Cougar quarterback is coming off a fantastic 2021 and he picked up right where he left off when the Cougars opened against USF, despite a near-three-hour rain delay. He threw for 261 yards on 25-of-32 passing, while throwing two touchdowns and one interception. He had a productive game against Baylor last year, throwing for 352 yards. But he threw just one touchdown and was sacked five times. BYU has to keep him up-right.

He missed the latter stages of last season with an injury. But the three-year starter is one of BYU’s most productive players. He had 56 tackles a year ago and was Pro Football Network’s Independent Linebacker of the Year. He has five career interceptions. The 235-pounder plays linebacker but has the skill set of a safety, so he can drop into coverage.

It’s hard to argue with blowing out an FCS opponent at home to start the season. Baylor’s fans went home happy, and head coach Dave Aranda surely like some of what he saw on film. Eight different players scored for the Bears, plenty of running backs took the football and quarterback Blake Shapen left the game early so that his backup could get some playing time. So it’s hard to a feel for how that translates for Saturday’s game. It could be a disadvantage. Baylor played BYU in October of last year, after playing a few conference games, and had a better feel for itself as a team. But, since BYU returns plenty of last year’s personnel, a dissection of last year’s game tape will surely help the Tigers.

USF itself wasn’t challenging but the conditions were. BYU had to wait nearly three hours due to rain delays. When it was all done, running back Chris Brooks had 135 yards and a touchdown, while threw for two scores. In an odd twist, BYU faced the quarterback that beat them last year with Baylor — Gerry Bohanon. He threw for 172 yards and an interception, while rushing for another 28 yards. Last season, Bohanon threw for 231 yards for a touchdown and an interception. Does that help one glean anything about where BYU is now, aside from the fact that Bohanon likely doesn’t have the personnel around him that he did a year ago? Probably not.

The longer Baylor walks around with a target on its back, the harder these games are going to get. BYU is not only out to prove it’s worth being ranked higher than No. 25, it’s out to prepare for the Big 12 next season. Beating Baylor is the perfect way to show they’re Big 12-ready. This will likely be the best game of the entire day in the Big 12. I’m taking BYU, but I could see Baylor winning by the same margin.