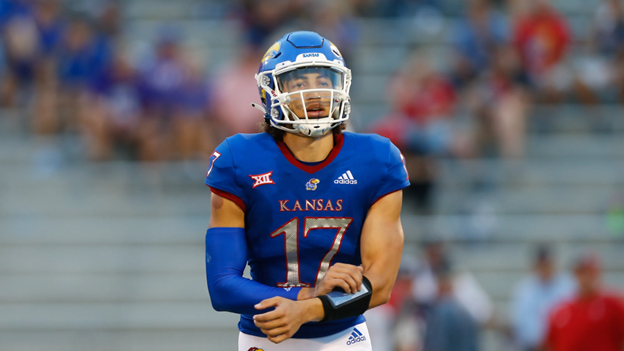 The Kansas Jayhawks dropped their first game of the season on Saturday in front of another sold-out David Booth Kansas Memorial Stadium. College GameDay was in town for the big game between these two Top 25 teams. The pre-game show averaged 2.3 million viewers throughout the show, their highest viewing total pre-November since 2010.

The GameDay crew wasn’t disappointed with how these two teams battled it out. TCU ended up winning 38-31, but it was a back-and-forth game from start to finish.

Surprisingly, the first half was a defensive battle. The top-two scoring offenses were limited to a combined 13 points in the first half of action. TCU lead 10-3 as the half came to a close, but the biggest loss of the first half for Kansas wasn’t being behind on the scoreboard. It was the loss of quarterback Jalon Daniels to a shoulder injury.

Daniels was running out of the pocket trying to make a play and nearly got to the sideline before being tackled throwing shoulder first into the ground. He remained on the ground for several minutes before being taken to the locker room. He was seen on the sideline in the second half wearing street clothes.

Kansas head coach Lance Leipold gave an update on Tuesday, saying Daniels is “day-to-day” and isn’t getting into the details of his injury with the media at this time. He did mention Daniels is “doubtful” for the game this week. It was reported that Daniels was out for the season on Tuesday, but Daniels refuted the report shortly after it was published.

However, former backup and 2021 starting quarterback Jason Bean entered the game in the second half and the team rallied around him. Scoring touchdowns on back-to-back possessions to start the second half, the Jayhawks took the lead for a brief minute, 17-10.

TCU would go on to score on their next two possessions and the game went back and forth the rest of the way. Bean threw a couple of fantastic deep balls to the end zone and looked very impressive in the fourth quarter. At the end of the game, the final touchdown went to the Horned Frogs with 1:36 left in the game.

The Jayhawks’ final drive fell just short of the end zone, as the referees swallowed their whistles on a horse collar tackle and a defensive holding that would have extended KU’s drive. Leipold said they would have gone for two had they scored a touchdown on that drive.

Now it’s onto Oklahoma. This Saturday the No. 19 Kansas Jayhawks (5-1, 2-1 Big 12) will travel to Norman, Oklahoma to face the Oklahoma Sooners (3-3, 0-3 Big 12) who have lost three straight games. OU was an early seven-point favorite as the betting lines were released and the Jayhawks will be looking to pull off another big upset on the road.

Oklahoma has crashed and burned ever since their big win at Nebraska in Week 3 of the season. Losses to Kansas State, TCU, and an all-time embarrassing loss to their rival Texas.

The Longhorns have put the Sooners on the ropes. Kansas, despite the close loss to TCU, didn’t drop at all in the polls. They should still feel good about their team and their chances against Oklahoma this weekend.

Leipold thinks the Sooners are too tough of a team and are coached up too well to not answer the call after some tough losses. It won’t be an easy game, not even close, but it is winnable. A win for the Jayhawks would get them to six wins on the season and give them bowl eligibility for the first time since 2008.

Kansas will get a bit of a boost to their wide receiver group this week. Trevor Wilson will be back with the team for full squad activities. There’s no certainty he will play this week, but he’s practicing and trying to catch up on things he’s missed the first six weeks of the season. Wilson had been temporarily removed from the team due to an arrest in August.

With the struggles Oklahoma has endured the past few weeks, and considering how good Jason Bean looked in the second half, I don’t anticipate a huge drop-off in quarterback play. Despite Jalon Daniels being an early Heisman candidate and being on the Davey O’Brien Award watch list, he did struggle against Iowa State and was struggling early on against TCU before he got hurt.

Kansas has the opportunity to go on the road and get a big win in conference play. The Sooners won’t go down quietly like they did last week against Texas, but Kansas has the players to keep up with a slumping Oklahoma squad. This should be another close game and Kansas knows how to handle those situations.