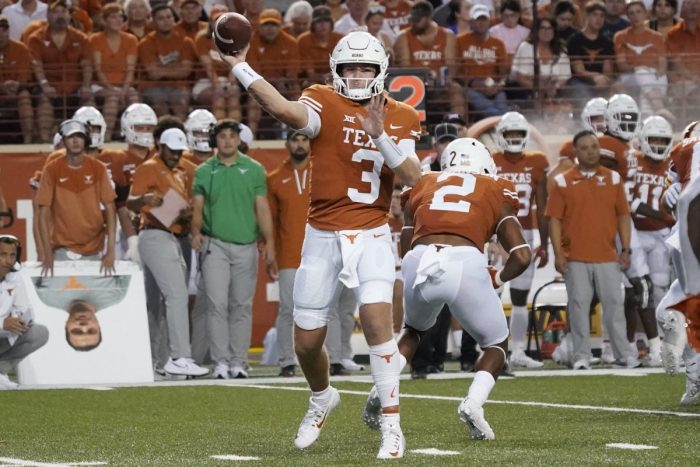 Here is everything you need to know about the upcoming matchup between the Iowa State Cyclones and the Texas Longhorns.

Fun Fact: The last time that Iowa State lost by more than two touchdowns was 30 games ago in its 2020 season opener against Louisiana, when the Ragin’ Cajuns won 31-14. Despite that, Texas is favored by 16 points heading into the contest.

Iowa State senior wideout Xavier Hutchinson is, without a doubt, the most dangerous offensive weapon that the Cyclones offense has in its arsenal. Hutchinson has recorded 57 receptions for 604 yards and five touchdowns on the year, including back-to-back 100-yard performances against Kansas and Kansas State. If the Cyclones hope to hang with Texas this weekend it will take some points, and the most reliable player for ISU right now is No. 8, so they will need to find creative ways to get him the football.

If there is one player on Iowa State’s roster that has a higher NFL ceiling than Xavier Hutchinson, it’s defensive end Will McDonald IV. McDonald has 32.5 career sacks (3.5 in 2022), which currently ranks second all-time in the Big 12 behind Texas A&M’s Von Miller (2007-10) who holds the record with 33. There’s a decent chance that the All-Big 12 defensive end could leave this game as the Big 12’s all-time sack leader, and that alone should tell you the type of impact he can have on a football game.

It appears that the preseason hype around Texas freshman Quinn Ewers was real. After carving up Alabama before being injured, it was discussed whether Ewers’ early performance was a fluke. Well, after the way that he effortlessly carved up Oklahoma, it’s safe to say that he might be a problem in the immediate future. Against one of the top defenses in the conference, Ewers will need to be sharp. If he is, watch out for the Longhorns down the stretch.

Texas’ secondary has been much-improved in 2022, and it will have one of its biggest tests of the year with Xavier Hutchinson coming to town. The leader of the defensive backfield, D’Shawn Jamison, leads the team with five PBUs and two interceptions on the year. His play will be important on Saturday and others like Ryan Watts and Anthony Cook will have their work cut out for them.

Can Iowa State’s defense contain Texas’ playmakers? The Longhorns have playmakers all over the field, with Bijan Robinson, Xavier Worthy, Roschon Johnson, and Ja’Tavion Sanders all capable of breaking games wide-open. It will certainly be the biggest test to date for the Cyclones, and if they can contain the Texas offense and keep them from putting points up in bunches, it should keep Iowa State within striking distance. However, that will be much easier said than done, as Quinn Ewers has shown he can make any throw on the field.

Can Texas build on the Red River Rout? Last week, the Longhorns embarrassed arch-rival Oklahoma in Cotton Bowl Stadium, winning 49-0. Now, can they build on that and finally make a run through the Big 12? Texas has long been trying to get “back,” and this squad looks like it could finally be the answer to that. Welcoming Iowa State into town and beating them down this week would be a good indication that this Texas team is finally different. Last year, Iowa State beat Texas 30-7 in Ames and I am certain that they haven’t forgotten about that.

I think this is a case of two teams heading in opposite directions, with Texas starting to pick up momentum and Iowa State starting to crumble offensively. Despite the fact that the Cyclones have been able to keep things close in Big 12 play for years, I think that it finally catches up with them this weekend in Austin as Texas is playing really good football right now. The Longhorns win big in Austin, setting up a monumental battle with Oklahoma State in Stillwater in Week 8.