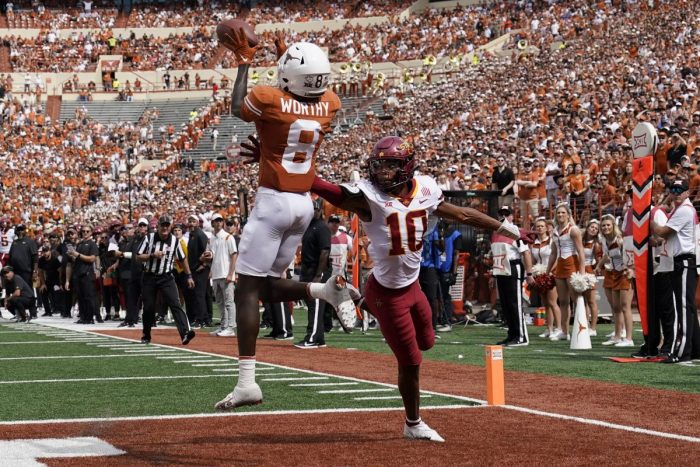 The Texas Longhorns hosted the Iowa State Cyclones on Saturday in a big match up for both teams. Iowa State came in with a 3-3 overall record, but 0-3 in Big 12 play. The Cyclones had lost their first three Big 12 games by a combined 11 points. Meantime, Texas was fresh off their biggest Red River Rivalry win ever, beating the Sooners 49-0 and improving to 4-2 overall and 2-1 in Big 12 action.

The Longhorns hung on for a 24-21 win over the Cyclones and here are three thoughts on the game.

1. A Game of Swings and Lead Changes

The Cyclones were on the verge of going up two scores against Texas on the road, with a 2nd and 3 from the Texas 4-yard line. But then, QB Hunter Dekkers threw into triple coverage and was picked off by Jaylan Ford for a touchback.

Here’s a look at the interception.

It swung the momentum right back into the hands of the Longhorns. Texas went on a nine-play, 80-yard drive for a touchdown and then added another score at the end of the quarter to take a 14-7 lead into the locker room.

But then, after 17-unasnwered points by the Longhorns, Iowa State went ahead and scored 14-unanswered points and took a 21-17 lead on a Hunter Dekkers touchdown run with 10:58 to play. Texas responded with an 11-play, 75-yard drive and scored a touchdown on 4th and goal from the three-yard line. The Iowa State Cyclones got the ball back with under five minutes left. On the drive, Xavier Hutchinson was wide open for what would have likely been a 52-yard touchdown, but he dropped the ball. Two plays later, Dekkers lost the ball on a hard and controversial hit, which resulted in a review over whether or not he was down before fumbling, but the play stood and Texas got the ball back with two minutes to go as the Longhorns hung on for a 24-21 win.

Bijan Robinson carried the load for Texas against the best rushing defense in the Big 12. Iowa State came in allowing only 91 rushing yards per game, but Robinson put together an impressive afternoon, with 28 carries for 135 yards, along with 36 receiving yards. He didn’t score any touchdowns on the afternoon, but several of his big plays were crucial in setting up the three eventual Texas touchdowns on the afternoon. Quinn Ewers wasn’t his sharpest on Saturday, finishing 17/26 for 172 yards, however it was Bijan who picked up the slack for the Longhorns.

This was a bit of a trap game for Texas, as they were following OU with Iowa State, which precedes four-straight games against ranked teams, including the next two on the road against Oklahoma State and Kansas State. Coming out with a win moves Texas to 3-1 in Big 12 play and in great position heading into the next two games to put themselves in the driver’s seat for a spot in the Big 12 Championship Game.

Iowa State dropped to 3-4 overall and 0-4 in Big 12 play. However, these four losses have been by a combined 14 points and the last three have been by three points or less (a total of seven points). Plus, a play here or a play there (against Kansas, K-State and Texas) and Iowa State could be 3-1 in the Big 12 and 6-1 overall. I understand that football can’t be viewed in “ifs and buts”, however, Iowa State is one of the youngest teams in the country in a year we all knew would be a bit of a rebuild.

Looking at the big picture, these guys are growing together and Matt Campbell with undoubtedly turn this season and these moments into positive, growth opportunities for his team. That perspective seems important for Iowa State fans who may prefer to look at just the record.