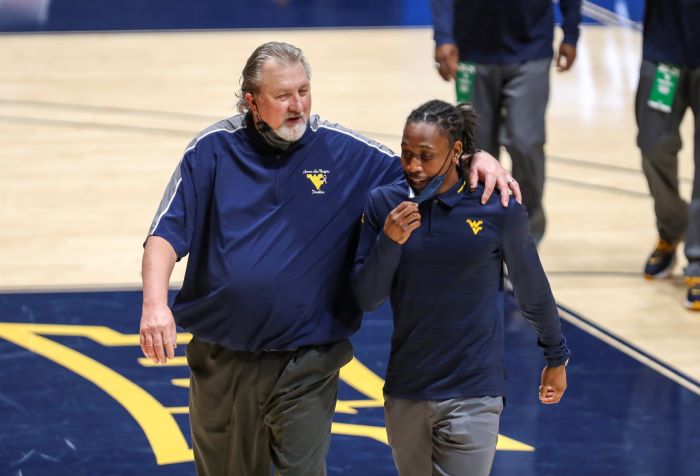 Leading up to the opening of the 2022-23 Big 12 Men’s basketball season Heartland College Sports will analyze each of the Big 12 men’s basketball rosters. Today it’s the West Virginia Mountaineers.

How The Mountaineers Are Built

Why?: This is a tough lineup to project. The Mountaineers are returning little scoring from last year’s team, but it would make sense for Kedrian Johnson to start at the point, since it’s his natural position. Stevenson didn’t come to Morgantown to sit after transferring from South Carolina. He averaged nearly 12 points per game and the Mountaineers need the offense. Toussaint rounds out the backcourt. He didn’t score much at Iowa, but he’s a solid passer and defender who might double last year’s 4.3 scoring average with more opportunities. Up front, Matthews slides into the lineup after returning to Morgantown. He transferred to Washington and is back for his final season. He knows the system and he knows what Huggs wants. Mitchell transferred in from Texas, where his playing time was uneven. He’s from nearby Pittsburgh, but the locals shouldn’t hold it against him. In two seasons at UMass, before transferring to Texas, Mitchell averaged 18 points per game. He’s talented enough to emulate that with WVU.

Why? With three transfers from non-two-year institutions, the lean will be toward the returning young players (at least early in the season). There will be opportunities for others to shine. But these three players stuck around after not playing much last year and have worked their way into a chance to prove they’re worthy of more. Watch Okonkwo. He’s the one that I think could make a significant impact early. Wague had a solid game in the Blue and Gold Debut but being a community college transfer it would be difficult to lean on him early. But watch his progress.

The wild card: Bell. College Hoops Today’s Jon Rothstein seems ready to anoint Bell a starter. Even though he spent two years with St. Louis, he went back to the junior college ranks last season and averaged nine points and nine rebounds. Look how long it took both Taz Sherman and Kedrian Johnson to make that transition from two-year college basketball? Still, Bell offers the Mountaineers something they need — height. At 6-foot-10, they need someone who can crash the glass inside. If he can provide that, he’s worth the playing time.