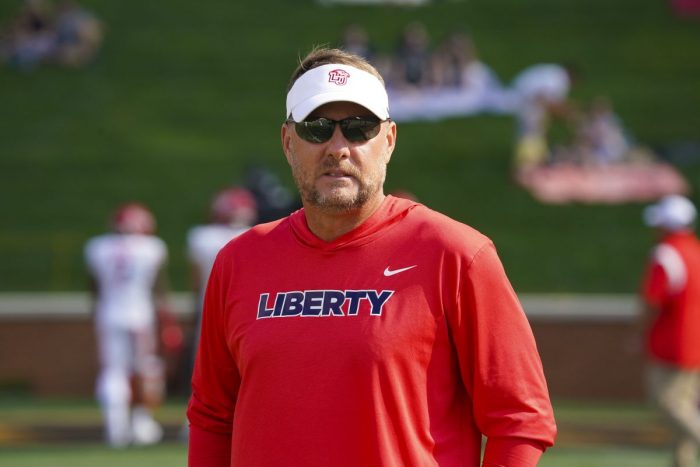 With Neal Brown on the hot seat at West Virginia, there has been plenty of speculation swirling as to who might be a target for the Mountaineers. One name that was popping up is Liberty coach Hugh Freeze. However, it looks like Freeze is off the table after he agreed to a new eight-year contract through 2030 with Liberty for just under $5 million per season, according to ESPN.

Freeze has gone 8-5, 10-1 and 8-5 at Liberty, while he has his team off to a 7-1 start this season, including a 41-14 win over BYU last week in front of the largest crowd in school history. The new contract makes Freeze one of the highest-paid coaches in the Group of 5.

There were plenty of rumors of rumblings of a connection between Freeze and West Virginia, but now it seems like a moot point.

One Liberty insider told the Voice of Motown, “I know that he would kill it at West Virginia and probably get 9+ wins every season, but when he leaves Liberty, I believe it will be for the SEC. He’s from the South and that’s where he ultimately wants to be.”

The insider listed other reasons for Freeze staying at Liberty including, “He has a work-life balance that he’s not sure he can replicate at a Power 5 school. Liberty is low pressure for him. He loves winning and Liberty is going to be favored in all 12 games on their schedule next year and could be playing in a NY6 bowl game, as crazy as that sounds. He hates NIL fundraising and knows what it takes to be at a Power 5 school now. He doesn’t have to do all of that at a G5 school like Liberty. He’s happy here with the faith-based mission of the school aligning to his mission as a coach, he deals with zero negative publicity about his wrongdoings in the past and I think he’s very happy here.”

Needless to say, there’s no reason to believe Hugh Freeze is worthy of being in a discussion as the potential next head coach in Morgantown. Onto the next round of speculation.