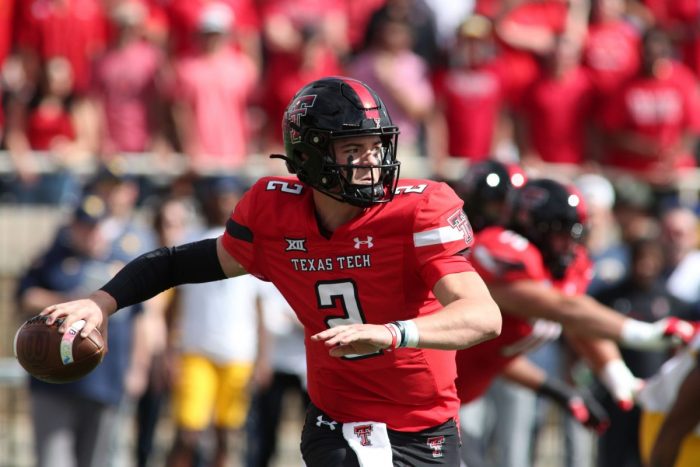 Here is everything you need to know about the upcoming matchup between the Baylor Bears and the Texas Tech Red Raiders.

Fun Fact: Saturday’s contest will mark the first for Texas Tech head coach Joey McGuire against his former school in Baylor. The Bears represented McGuire’s first position at the collegiate level as he served in a variety of roles at Baylor, coaching the tight ends from 2017-18, the defensive ends in 2019 and then the outside linebackers in 2020-21. He was promoted to associate head coach prior to the 2019
season. His son, Garret McGuire, was a quarterback for Baylor from 2017-20. – Texas Tech Game Notes

A dynamic playmaker has emerged in the Baylor backfield, as freshman running back Richard Reese has solidified himself as the Bears’ top running threat through seven games. Reese has turned 116 carries into 643 yards (5.5 ypc) and nine touchdowns on the year. That is plenty good enough to keep the running game going and allow Blake Shapen to go to work downfield. If he can keep chewing off chunk plays like he did against Kansas last week, it could really help Baylor turn the corner and become the contender we thought they would be coming into 2022.

Baylor’s leading tackler in 2022 with 40 total stops, Al Walcott has been all over the field since the beginning of the year. He also has three PBUs, one sack, and one forced fumble to his credit this year. On Saturday, Walcott will likely have to keep Texas Tech quarterback Behren Morton in check, and that has been much easier said than done over the last two weeks. His involvement in run fits can’t be overstated either, as Walcott has been a do-it-all kind of player in 2022.

After an impressive first start against Oklahoma State two weeks ago, freshman quarterback Behren Morton put on another show against West Virginia, completing 28 of 45 passes for 325 yards and two touchdowns with no interceptions. Over the last two weeks, the Texas Tech offense has looked as good as it has all season against comparable talent, and it’s safe to say that Morton deserves at least some of that credit. Baylor might give him some new looks, but Morton seems to be a gamer, and that is good news for Raider Nation.

Texas Tech’s best defender without question is senior linebacker/defensive end Tyree Wilson. Wilson has recorded at least half a sack in six of seven games this season and has two multi-sack games. He’s tied for 21st nationally with 6.0 sacks on the year, but also has a forced fumble and recovery as well. Wilson will have a role to play in this game if Texas Tech is to take home a massive home victory over the Baylor Bears.

Can Baylor handle the night game road atmosphere in Lubbock? A 6:30 p.m. kickoff means that things will be rowdy in West Texas, and that has spelled danger for so many opponents in the past. Good teams, as Baylor hopes to be, can go into environments like that and take care of business. We’ve seen glimpses of the Bears’ potential (first half vs. Kansas), but can they put together a full performance?

Is this the point where we see Texas Tech turn into a Big 12 contender? Last week’s win over West Virginia was impressive, and the Red Raiders went 1-2 against three ranked opponents in a row before that. It kind of feels like things are starting to click in Lubbock, and a win over Baylor might just get this thing rolling in a hurry. It Tech can take care of business here, it will not only likely be headed to a bowl game, it could be a contender for the Big 12 crown in Joey McGuire’s first year.

This game feels like a toss-up, so I’m giving the edge to the home team. Texas Tech has something special in Behren Morton and I think he does enough in this game to give the Red Raiders the edge in the end. Tech’s defense will have to hold Richard Reese in check to win this game, and if they can’t Baylor is fully capable of winning this game comfortably. However, I’m rolling with Raider Nation and picking Joey McGuire to start 1-0 against his former mentor in Dave Aranda.