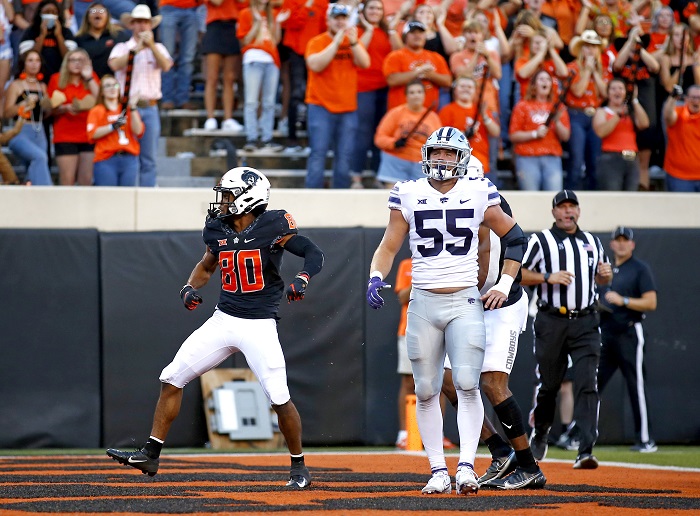 Here is everything you need to know about the upcoming matchup between the Oklahoma State Cowboys and the Kansas State Wildcats.

Fun Fact: The last time that either of these teams held a winning streak longer than three games in this series was K-State’s run from 1990-2002, when K-State won nine games in a row. Coincidentally, immediately before that streak, the Cowboys had won 16 of the last 18 matchups, including two runs of six wins in a row, from 1972-1989.

The unquestioned leader for Oklahoma State, quarterback Spencer Sanders responded well to last week’s loss by playing one of the best games of his 2022 campaign against Texas. Sanders completed 34/57 for 391 yards and two touchdowns, adding 11 carries for 43 yards on the day. Sanders did throw his third interception in four games, but he led a balanced attack that gave Steve Sarkisian and the Longhorns’ defense fits all day. While his health remains a bit of a question, it would take an awful lot for Sanders to miss any time down the stretch as Oklahoma State eyes another run at a Big 12 title.

One of Oklahoma State’s most seasoned defensive veterans, safety Jason Taylor II was vital to the Pokes’ 41-34 victory over Texas this past weekend. Of Quinn Ewers’ three interceptions, Taylor was a recipient of two and added nine tackles to his tally for Saturday afternoon. Late in the fourth quarter, after his second interception of the game, Taylor landed awkwardly and was down on the sideline for a while before being helped to the locker room. His availability going forward will be key for a struggling secondary in Stillwater and if he can’t go, someone will need to step up immediately.

After K-State’s first drive against TCU, star quarterback Adrian Martinez exited the game with an apparent leg injury after one passing attempt and a 19-yard run on the day. Martinez reportedly reaggravated a deep knee bruise suffered against Iowa State, and was unable to return to play against TCU. His availability against Oklahoma State will be paramount to K-State’s success, as the Wildcats will need to be as close to 100% as possible to take down the Pokes. If he can’t go, Will Howard may be forced to step in, and he is coming off an injury suffered in the TCU game as well.

Besides perhaps Deuce Vaughn, there isn’t a player on Kansas State’s roster that has an NFL ceiling comparable to Felix Anudike-Uzomah. The junior defensive end leads K-State in tackles for loss (8) and sacks (6.5) and is a force on the edge for the Wildcats’ defense. For K-State to have a shot at winning this game, No. 91 will need to have an impact on Spencer Sanders. Anudike-Uzomah has terrorized quarterbacks for the better part of two seasons now though, so that isn’t too much of an ask for the dynamic defender.

Can Spencer Sanders play a clean, turnover-free game on the road in Manhattan? It’s a fair question and one that could have a part to play in the outcome of this game. Sanders has had an issue with interceptions for his entire collegiate career, and he will be tasked with facing the Big 12’s top defensive unit for forcing INTs, with nine on the year. If K-State can force Sanders into a couple of mistakes, it could give K-State the opportunities they need to pull off the upset.

Will K-State’s star players be available against Oklahoma State? QB Adrian Martinez, LB Daniel Green, RB Deuce Vaughn, CB Julius Brents, and S Josh Hayes were all either banged up or exited the game against TCU last week, and it had a visible impact on how they played. This week, K-State needs as many of those pieces back, and as close to 100% as possible, against Oklahoma State.

I think there are too many question marks around Kansas State’s playmakers right now for me to feel confident in picking them to win a tight game over one of the top teams in the Big 12. Oklahoma State hung around and found a way to beat Texas last weekend, and if anything, I have confidence that they can do that again. Kansas State is certainly capable of winning this game with defense and if they can force Spencer Sanders into a couple of mistakes, I like their chances. But, for now, I’m rolling with Mike Gundy and the Oklahoma State Cowboys to win in a mini-upset.