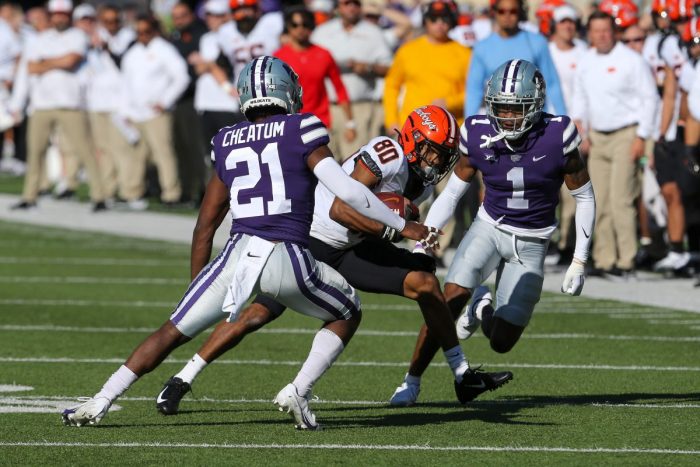 Week 9 of the Big 12 football season is in the books as the college football season puts a bow on the month of October. There were four games this week, with Oklahoma beating Iowa State 27-13, TCU holding off West Virginia 41-31, Kansas State crushing Oklahoma State 48-0 and Baylor beating Texas Tech 45-17.

So with another wild week in the books, here are the five biggest takeaways from Week 9 in the Big 12 Conference.

When TCU trailed 7-0 and 14-7, that was nothing. This team came back from 17 points down two weeks ago against Oklahoma State and then trailed by 18 points last week against K-State before winning. So when they trailed by a touchdown, Sonny Dykes had the Mountaineers right where he wanted them. TCU ended up beating WVU 41-31.

But at some point, something has to give, right? How long can TCU keep falling behind and coming back to win? No doubt this offense is far more explosive than what Gary Patterson had the last few years, but the slow starts need to be corrected for this team to win the Big 12 and potentially have a chance to make the College Football Playoff.

On deck, TCU has to play the other three Texas schools in the Big 12, Texas Tech, Texas, Baylor and then wrap up the season with Iowa State. Slow starts against these four won’t work.

Also, it will be interesting to see what the College Football Playoff committee decides to do with TCU on Tuesday night given how they’ve gone about winning their recent games.

2. Iowa State’s Offense is the Scariest Part of Halloween Weekend

It’s just ugly (on offense) in Ames. Like really ugly.

Iowa State lost its fifth game in a row Saturday, 27-13 against Oklahoma at home. The Cyclones came into the game averaging just 97 yards per game, which was 30 yards less per game than any other team in the Big 12 Conference.

And against Oklahoma, it wasn’t any better. In fact, it was worse. The Cyclones had 27 carries for a grand total of 66 yards for 2.4 yards per carry. And this was an Oklahoma defense that even after this game ranks dead last, by a mile, in rushing yards allowed per game. OU is giving up 189 yards per game on the ground (that includes the 66 vs. Iowa State!), which is 28 yards per game more than anyone else in the league.

Iowa State fans have been spoiled with the likes of David Montgomery and Breece Hall in recent seasons, but this is hard to watch.

And now for quarterback Hunter Dekkers, he’s clearly pressing after tossing three interceptions on Saturday. But the biggest problem is the progress, or lack thereof, for Dekkers. He now has had a QBR below 50 in four of his last five games. It’s not entirely his fault, but he’s not giving Iowa State fans a ton of reasons to be confident about the future at the position.

Then again, no one on offense, including the staff, is giving the fan base much to be confident about moving forward.

The Wildcats put together the most dominant performance in the Big 12 this season with a 48-0 win over Oklahoma State. Sorry, Texas fans, I can’t say your win vs. Oklahoma is more impressive since you were facing a back up quarterback. In fact, it was K-State who was playing with their back up quarterback against arguably the best QB in the Big 12 in Spencer Sanders and they held the Pokes to 217 yards, which is nearly 250 less than the Cowboys have been averaging each game.

Heck, K-State never let Oklahoma State inside their own 38-yard line. It was Oklahoma State’s worst loss since 2000 and Kansas State’s largest win vs. a ranked team since 2002.

Oh, and did I mention they did it all with their back up QB Will Howard? I know, I did, but it’s worth saying again.

It makes you wonder how things are different today if Howard doesn’t also get hurt at TCU last week and what that means regarding the hierarchy of the Big 12 right now.

4. Baylor Remains in the Mix

The Bears took care of business in Lubbock on Saturday night against Texas Tech and have now won two Big 12 games in a row after a 1-2 start to the season. They’re technically in a tie for third place in the league behind TCU and K-State, but of course don’t hold the tiebreaker over OSU. That being said, they still control their own destiny since they have to play the two teams in front of them in the standings in Kansas State and TCU, while traveling to Texas to end the season, as UT is also sitting at 3-2 in conference play.

The fact remains that the Big 12 Conference is the most exciting league in the country. We are going to enter November with half the half bases believing their team can play for a conference championship in four weeks: TCU, K-State, Baylor, Oklahoma State and Texas.

What other conference in America can make such a claim? I’ll save you the research: none.

In a league that is as close as any conference in America, the Big 12 hasn’t had a weekend where there have been at least two games decided by at least three possessions in a month (TCU 55, Oklahoma 24 and Texas 38, WVU 20 on Oct. 1).

But then came Saturday.

First, there was Kansas State’s dominant victory at home over Oklahoma State 48-0. And then came Baylor’s 45-17 win at Texas Tech.

Big 12 fans have been spoiled with all these one-score games in recent weeks. I admit, it was weird to watch a couple of blowouts as we did. And while the Iowa State-Oklahoma game was technically a two-score game, with ISU’s offense, it felt like three or four scores.