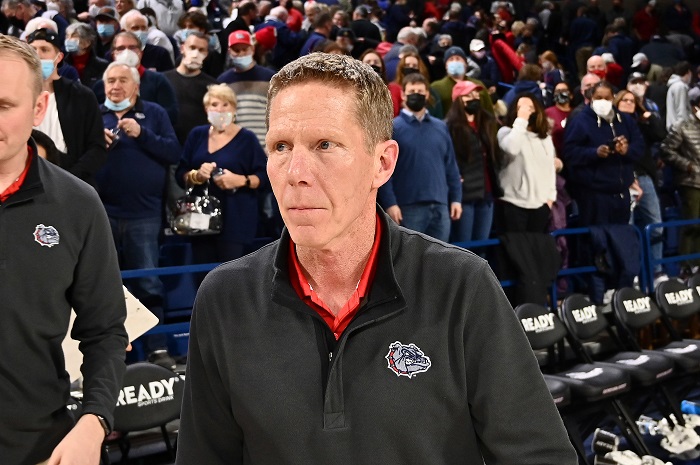 ESPN’s Pete Thamel dropped a bombshell report on Wednesday as sources tell him that Gonzaga athletic director Chris Standiford met with Big 12 Commissioner Brett Yormark last week in person to discuss the possibility of the Zags joining the Big 12 Conference.

According to Thamel, Yormark and Standiford met at the Hyatt in Frisco, Texas, while the Zags basketball team was in the Dallas area to play Tennessee in a scrimmage.

This news backs up the stance that Yormark has preached since taking the job as Big 12 commissioner, saying that he was going to be aggressive about expansion and that the Big 12 was “open for business.”

While Gonzaga hasn’t had a football team since 1942, its basketball program has been a national powerhouse for years and adding the Zags to an already stacked Big 12 slate would make this conference the unquestioned hub of college basketball.

Thamel says that Gonzaga has been exploring its conference options and that the Pac-12 and Big East have both been in talks with the Zags, but to what extent is unknown. Currently, Gonzaga plays in the West Coast Conference, a mid-major conference that it has dominated along the way to becoming one of the top basketball programs in America.

The Big 12 going after Gonzaga is a no-brainer from a basketball perspective and the conference is already home to the last two national champions: Kansas and Baylor. Adding Gonzaga would not only be big for the conference, but it would also shift the entire college basketball landscape.

While this is an exciting report for sure, there are still some roadblocks to overcome. First and foremost, how does the payout from the Big 12’s new media rights deal get affected by adding a school like Gonzaga. Without football, it won’t have near the economic impact that adding a school like Arizona might, but the Gonzaga name carries huge weight in basketball and would certainly be something that ESPN and FOX would like a part of.

According to Thamel, adding Gonzaga was something that the Big 12 brought up in its talks ahead of reaching its new television deal, although the potential addition had nothing to do with the Big 12’s final deal.

Adding Gonzaga would certainly be an eye-opening move for the conference and one that could greatly impact things moving forward, and here is why we thought it was a good idea back in July.