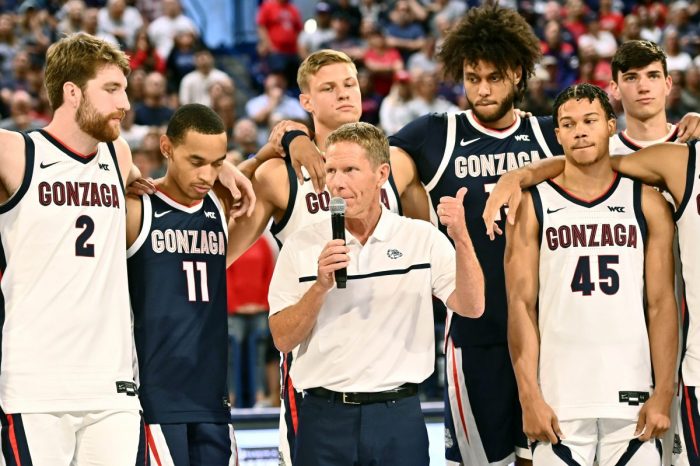 A surprising report dropped this week that the Big 12 and Gonzaga have met about the University joining the conference.

According to ESPN’s Pete Thamel, Big 12 commissioner Brett Yormark and Gonzaga AD Chris Standiford met at the Hyatt in Frisco, Texas, while the Zags basketball team was in the Dallas area to play Tennessee in a scrimmage.

This news backs up the stance that Yormark has preached since taking the job as Big 12 commissioner, saying that he was going to be aggressive about expansion and that the Big 12 was “open for business.”

And while I am a fan of the Big 12 being the hunter and not the hunted, there are three reasons I don’t think this move makes sense for the Big 12.

Gonzaga is Not Gonzaga in the Big 12

Yes, Gonzaga is a great basketball program. However, Gonzaga has benefited tremendously from being West Coast Conference. They have made two Final Fours the last six years, three Elite Eights, and multiple Sweet 16’s.

But, Gonzaga getting to play in the WCC has allowed them to end up as a No. 1 or No. 2 seed many years, giving them a much easier path to a Final Four than being a mid-seed in the NCAA Tournament. While Gonzaga has made the most of their recent appearances, including two National Runner-ups in 2017 and 2021, how likely would that have been had they had to play in the rough-and-tumble Big 12 Conference?

The Zags have lost a total of two conference games the last four seasons. Of course that would’ve never happened in the Big 12 Conference where there are no bad teams. Gonzaga would lose at least a few conference games, if not more, and would likely not be sitting with a No. 1 or No. 2 seed most years. Plus, then they’d be playing in the Big 12 Conference Tournament in Kansas City before then rolling into the NCAA’s.

How much has Gonzaga benefitted from fresh legs and top seeds come March? There’s no way of knowing for sure, but it’s a serious conversation worth having.

The heyday of the Big East Conference came about 15 years ago when the league was a powerhouse in hoops with Syracuse, Villanova, Notre Dame, West Virginia, Georgetown, and several others. The basketball was tremendous. But part of the downfall of the league is that there were mixed priorities. Some of the schools were exclusively basketball schools and either did not play football or played FCS football. Then you had some schools who were Power 5 football schools and wanted to chase football money. That led to the demise of the conference.

And while the Big East is thriving in its own way as a basketball-first league, it’s not the moneymaker the Big 12, or any Power 5 league, is. It sounds great on paper to have a basketball conference with Kansas, Baylor, Houston, Gonzaga and others, but the money in college sports comes from football, not basketball. And bringing in a private school with an enrollment of less than 10,000 isn’t a cultural fit and isn’t a sports fit considering the Zags haven’t had a football program since World War II.

Plus, does Gonzaga get added for all the other Olympic sports? What cost does that add to the travel budget of West Virginia, UCF, Cincinnati and others to go to Spokane, Washington for a volleyball match. And if Gonzaga isn’t going to bring added revenue to the table (which it’s not, as a basketball school), then the idea loses merit.

Lastly, if Gonzaga doesn’t get added for other sports and is exclusively for basketball, does that cause a scenario where the conference, a la the Big East of 20 years ago, is beginning to fracture over different wants and needs? It should be a long-term consider if this move is made.

If Mark Few gets burnt out next season, what is Gonzaga basketball? Think it can’t happen? Who saw Jay Wright retiring from Villanova coming off another Final Four back in April? Things happen. These coaches are human beings. Mark Few is going to be 60 years old.

Does Gonzaga maintain what it has been under Few after he is gone, whenever that time comes? Maybe, but there’s no guarantee that it happens. And if it doesn’t, Gonzaga can very quickly fall back to irrelevancy given that it’s a smaller, private catholic school and its location in Spokane, Washington, which is hundreds of miles from top recruits.

Is that the next big bet that Brett Yormark wants to make?

All of these things are items for the Big 12 to strongly consider if they are serious about bringing in Gonzaga. And for those of us who have been around college sports long enough, the downside of a move like this far exceeds the potential upside.