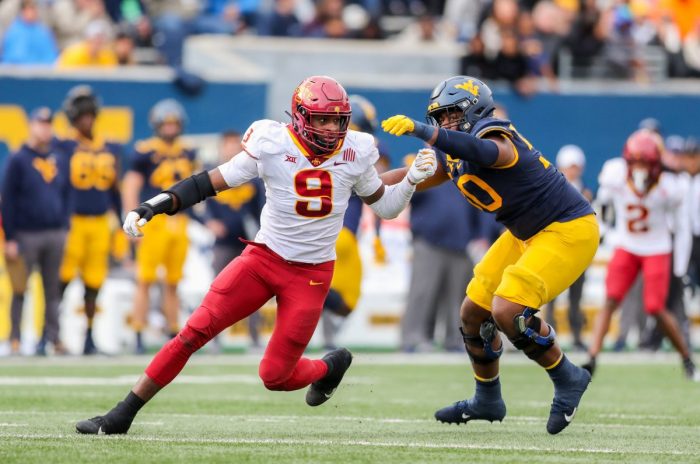 Here is everything you need to know about the upcoming matchup between the West Virginia Mountaineers and the Iowa State Cyclones.

On Tuesday it was announced that freshman running back CJ Donaldson is done for the remainder of the 2022 season, and both Tony Mathis Jr. and Justin Johnson missed last week’s game due to injury. That leaves backup quarterback Garrett Greene, who has eight carries for 66 yards on the year, as the Mountaineers’ leading rusher coming into this game. Mathis or Johnson need to find a way onto the field Saturday, because if they don’t the West Virginia offense could instantly become one-dimensional against the Big 12’s top defensive unit.

Last week against TCU, West Virginia sophomore linebacker Jared Bartlett had a good game despite the loss. Bartlett was second on the team with five tackles, but also recorded the team’s only sack and also a tackle for loss. Iowa State’s rushing offense is far less potent than TCU’s but they will still try to run the football and be physical up front. Bartlett, coming off his best game of the year, will be a key part of West Virginia’s defensive scheme.

Xavier Hutchinson is coming off the worst game of his 2022 campaign, turning 10 receptions into just 72 yards and no scores on the day. That might be a great day at the office for most wideouts, but Hutchinson has eclipsed 100 yards receiving in four of Iowa State’s eight games to this point, and 72 yards was his season low. I expect the Cyclones to go to him early and often in this game, as Hutchinson presents the biggest challenge to West Virginia’s defense and is the best offensive player for either team in this game.

As I mentioned earlier, Iowa State DE Will McDonald has 32.5 career sacks and is just one-half sack away from tying Texas A&M’s Von Miller as the all-time Big 12 sack leader. West Virginia has actually been pretty good in pass protection, only allowing 1.50 sacks per game. However, McDonald is one of the best pass rushers in the country and can take over a game on his own. If No. 9 can have his way against the West Virginia tackles, it could be the difference in the game.

Will the Mountaineers be able to manufacture a running game? West Virginia will be without its top rusher and potentially its top three rushers on the year. Couple that with facing an Iowa State unit that ranks 26th nationally with just 114.9 rushing yards allowed per game and there could be serious trouble. Whether it’s packages with Garrett Greene running the ball or finding a new ball carrier to lean on, West Virginia had better find a way to get something going on the ground, or the Iowa State pass rush will have a heyday in the backfield.

Can Iowa State stay out of its own way long enough to win a game that it should? Whether its been special teams’ blunders, dropped touchdown passes, blown coverages, or bad penalties, Iowa State has found more ways to lose games this year than it has to win them. West Virginia will roll into Ames on a two-game skid and could be down to a fourth-string running back. If there were ever a “get-right” game for the Cyclones, it’s this one. Iowa State needs to just do what it does best: play defense, run the ball, and get Xavier Hutchinson enough touches to win the football game.

In a battle that will likely determine 10th place in the Big 12 standings, Iowa State distances itself from a beat up West Virginia squad and finally gets its first conference win of the year. There’s a chance that the Cyclones could run away with this game, but I don’t think that they will in the and will make a mistake or two that keeps WVU in the game until the end. However, a win is a win in the Big 12 this year, no matter how you slice it, and Matt Campbell and the Cyclones will just be happy to get back on the right side of the scoreboard going into the final stretch of the 2022 season.