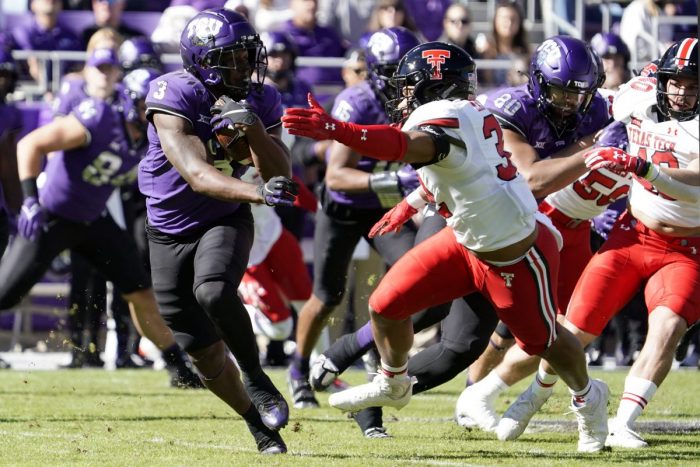 TCU took its 8-0 record into Saturday’s game against the Texas Tech Red Raiders. The Horned Frogs remained the only undefeated team in the Big 12 going into November after another comeback win last week against West Virginia. Meantime, Texas Tech was fresh off a 45-17 loss to Baylor last weekend.

The Horned Frogs were also looking to prove they were shafted by the CFB Playoff committee last week, while Tech was looking to take one step closer to bowl eligibility.

On Saturday, it began as a low-scoring affair between these two teams as both offenses dealt with injuries. But ultimately, it was TCU beating Texas Tech 34-24 on Saturday in Forth Worth.

Texas Tech Coaching Arguably Gave This One Away

I understand that Joey McGuire’s attitude all season long has been to go for it on fourth down when the analytics suggest it. But it certainly feels like considering the pace and flow of the game is an important part of the decision making and the Red Raiders failed on that front on Saturday.

Tech was trailing 20-17 early in the fourth quarter as the defense was playing great and confusing Max Duggan all afternoon. And with the ball on their own 36-yard line, and without starting QB Behren Morton, Tech went for it on a 4th and 2 and it resulted in a turnover on downs. TCU scored a touchdown three plays later on a 23-yard connection between Duggan and Derius Davis.

On the very next drive, Texas Tech also went for a 4th and 4 from their own 45-yard line and did not convert. And six plays later, it was Duggan finding Emari Demercado for a 16-yard touchdown score and a 34-17 lead. This game turned in the span of six minutes thanks to two decisions from the Tech coaching staff to go for it on 4th down, despite the fact that their defense was playing outstanding football most of the afternoon and TCU was without its best weapon in Quentin Johnston.

I know this is what Texas Tech does, as they had 36 4th-down attempts entering this game, nine more than any other team in the Big 12, but considering how this game had gone through the first three quarters, these decisions are very easy, and reasonable, to second guess.

Max Duggan Didn’t Have It

The box score won’t necessary show it, but Duggan was off all day. He wasn’t going through his progressions well, trying to do too much on his feet, and missing throws. It was, by far, Duggan’s worst game of the season, especially the first three quarters.

Not having Johnston due to a right ankle injury was clearly impacting Duggan in the red zone and over the middle of the field. He seemed completely out of sorts.

But then, as noted above, Texas Tech’s coaching decisions gave the offense life and confidence, as Duggan clicked on two-straight drives which resulted in touchdown passes to help TCU put this game away in the fourth quarter.

Duggan’s final stat line looks like this: 12/23 for 195 yards, two touchdowns and zero interceptions. It doesn’t look all that bad, but it wasn’t good, especially before the fourth quarter. However, the Horned Frogs won the game and are now 9-0.

TCU is Still Undefeated, but I’m Sure the CFB Playoff Committee Won’t be Impressed

What excuse will the CFB Playoff committee have this week for why they aren’t giving TCU any credit? The defense played better, which is one thing they insisted they wanted to see from the Horned Frogs. But now, given the offensive struggles, I bet that will be held against them.

At least TCU didn’t trail by more than three points in this game, since that apparently matters too. But once again, only for TCU, not say, Ohio State, who was down early against one of the worst Power 5 teams in college football.

By the way, Brett McMurphy had this spot-on analysis.

He’s absolutely right. But regardless, the Horned Frogs are 9-0 and three wins away from an undefeated 12-0 regular season before a potential Big 12 Championship Game. The pressure will continue to grow every week from here on out. But if TCU plays this kind of a game next week against Texas or in two weeks against Baylor, they will drop one of them. So it’s time to regroup and make sure they aren’t repeating this performance going forward.