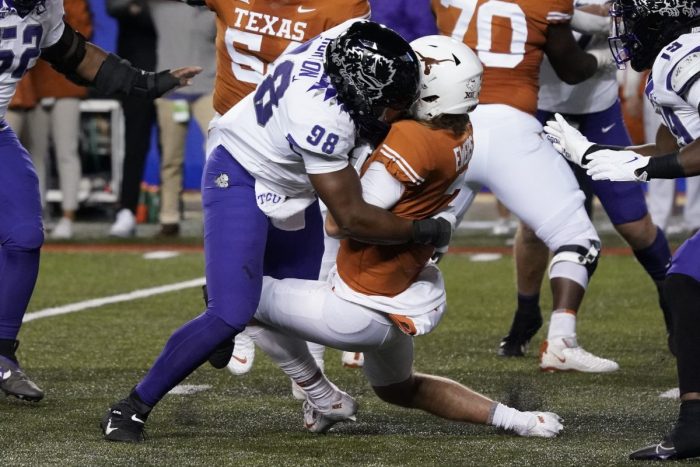 TCU and Texas squared off in one of the best games of the college football weekend. The Horned Frogs were undefeated and ranked in the Top 4 of the latest CFB Playoff rankings, while Texas was also ranked and the Longhorns were actually the heavy favorites coming into this game.

It was the marquee match up on ABC on Saturday night as this game would go a long way to defining the Big 12 race, along with the College Football Playoff race.

And on Saturday, the game got off to an incredibly slow start (more below), but TCU put together two impressive touchdowns in the second half, which proved to be enough in a 17-10 win over the Texas Longhorns in Austin. Here are three thoughts on the game from Saturday night.

1. A Historic First Half

Just how slow of a start did this game get off to? It was the kind of game Big 12 fans haven’t seen in years, if ever. TCU led this game 3-0 at halftime, but here’s a deep dive into the numbers: TCU and Texas combined for a total of 39 yards in the first quarter, which is the fewest combined total yards in a first quarter for any FBS game this season.

TCU’s run defense defense has been average this season (No. 4 in the Big 12), but they were absolutely on their game on Saturday, locking down the Texas running attack. TCU held Texas to 28 rushing yards on 22 carries, while Bijan Robinson had just 29 rushing yards on 12 carries. This was Bijan’s lowest rushing total since October of 2020 against Oklahoma when he had just 17 rushing yards his freshman season.

Texas’ inability to establish the run meant that Quinn Ewers was asked to carry more of the load, but he wasn’t able to do that as he finished 17/39 for 171 yards, zero touchdowns and one interception. Granted, some Texas receivers had some critical and bad drops, but Ewers was also inconsistent all night with missed throws and over throws.

Quentin Johnston returned from an ankle injury suffered last week against Texas Tech and the wide receiver made his presence felt. He had three catches for 66 yards, including the touchdown catch that put TCU up by two scores in the fourth quarter when Max Duggan heaved it towards the end zone under serious pressure, knowing Johnston would be where he was supposed to be, and was wide open for the touchdown grab.

Johnston was clearly a focus for the Texas defense and that opened things up enough for the rest of the TCU offense, including running back Kendre Miller, who rushed for 138 yards on 21 carries with a touchdown. Miller remains one of the most underappreciated skill position players in the Big 12, and was a big reason TCU won this game, including a 75-yard touchdown run in the third quarter.

4. The Best Kind of Win for TCU

TCU couldn’t have asked for a better way to win this game than the way they did. This wasn’t TCU’s ideal game. The offense wasn’t high-flying, but rather it was the defense that got it done. And since they were in the primetime ABC slot, they had more national eye balls than they probably had for most of their other games this season. And they won this game on defense and in fairly ugly fashion behind their running game.

Now I’m sure some national media folks will try to downplay TCU’s performance, because, well, that’s what the national media does when it comes to the Big 12, and especially TCU. But any objective observer should be very impressed by TCU, who improved to 10-0, and is right in the thick of the College Football Playoff hunt.