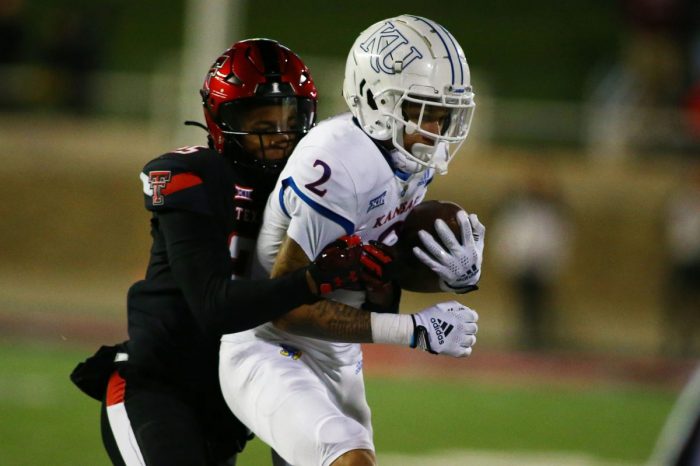 The Kansas Jayhawks and Texas Tech Red Raiders met on Saturday with the two teams trending in different directions. After a three-game losing streak, Kansas took its bye week to regroup and dominated Oklahoma State last week at home. Meantime, Texas Tech came into this game having lost four of five games, including last week’s disappointing defeat at TCU. Kansas was officially bowl eligible, while Tech was still needing to win two of their final three games to reach that mark under first-year head coach Joey McGuire.

On Saturday night, it was Texas Tech getting off to a red-hot start that they would never relinquish in a 43-28 win over Kansas in Lubbock. Tech put together two 75-yard drives in the first quarter to jump out to a 17-7 lead, and while Kansas would try and claw back, they could never get it closer than four points (24-20 in the second) and the comeback came up short. The two teams combined for over 1,000 yards, but it was Texas Tech winning the game and improving to 5-5 (3-4), while Kansas dropped to 6-4 (3-4).

Shough came to Lubbock with huge expectations after transferring in from Oregon following the 2020 season. But the injury bug has bit him each of the past two seasons. He’s started the season as the starter each season, but has lost the job to injury each time. But, he’s now back and healthy and got a chance in place of the now-injured Behren Morton, and Shough made it count. He finished the night 20/33, for 246 yards, one passing touchdown, along with 12 carries for 76 rushing yards and one rushing score.

This was his best game since he threw for 399 yards and four touchdowns against FIU early in the 2021 season. Between Shough, Donovan Smith and Behren Morton, Tech may have the deepest quarterback room in the Big 12, and that was on display once again on Saturday night at home against the Kansas Jayhawks.

Kansas couldn’t get any stops against the Texas Tech rushing attack, which piled up 264 yards on 48 carries, good for 5.5 yards per carry. KU came into this game in the bottom half of the Big 12 Conference, allowing 156 yards per game on the ground, but this performance was especially difficult to swallow. Given that Texas Tech ranks near the bottom of the Big 12 in rushing yards per game and has an offensive line that has struggled all season long, this is an especially bad showing.

Kansas’ offense had a good night with over 500 total yards in this game and 28 points, but the defense just didn’t hold up its end of the bargain after a strong performance at home against Oklahoma State last week.

Considering the Jayhawks close the season with Texas and Kansas State, the defense is going to have to regroup after this game and figure out where things went wrong, because if not, Bijan Robinson and Deuce Vaughn are going to go off against this Kansas run defense.

Texas Tech had to win two of their final three games to reach a bowl game in Joey McGuire’s first season on the job and now they’re halfway there with two very winnable games remaining on the schedule. Texas Tech travels to Iowa State next week. The Cyclones are 1-6 in Big 12 play this season. Then, they get the Sooners at home to wrap up the regular season. Oklahoma is currently 5-5 and has Bedlam next weekend. Could you imagine a scenario where Texas Tech and Oklahoma are playing in Week 13 for a trip to a bowl game? That’s something I would not have predicted back in August.